Synchronized oscillations within and between brain areas facilitate normal processing, but are often amplified in disease. A prominent example is the abnormally sustained beta-frequency (∼20 Hz) oscillations recorded from the cortex and subthalamic nucleus of Parkinson's disease patients. Computational modeling suggests that the amplitude of such oscillations could be modulated by applying stimulation at a specific phase. Such a strategy would allow selective targeting of the oscillation, with relatively little effect on other activity parameters. Here, activity was recorded from 10 awake, parkinsonian patients (6 male, 4 female human subjects) undergoing functional neurosurgery. We demonstrate that stimulation arriving on a particular patient-specific phase of the beta oscillation over consecutive cycles could suppress the amplitude of this pathophysiological activity by up to 40%, while amplification effects were relatively weak. Suppressive effects were accompanied by a reduction in the rhythmic output of subthalamic nucleus (STN) neurons and synchronization with the mesial cortex. While stimulation could alter the spiking pattern of STN neurons, there was no net effect on firing rate, suggesting that reduced beta synchrony was a result of alterations to the relative timing of spiking activity, rather than an overall change in excitability. Together, these results identify a novel intrinsic property of cortico-basal ganglia synchrony that suggests the phase of ongoing neural oscillations could be a viable and effective control signal for the treatment of Parkinson's disease. This work has potential implications for other brain diseases with exaggerated neuronal synchronization and for probing the function of rhythmic activity in the healthy brain. 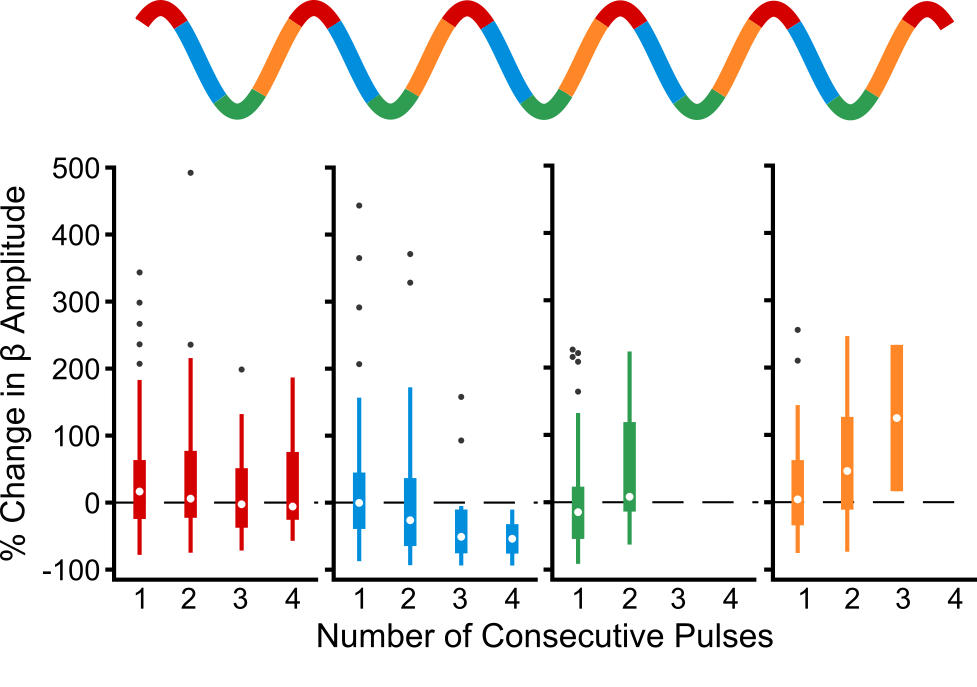