Balance between competing spectral states in subthalamic nucleus is linked to motor impairment in Parkinson's disease.

Nerve cell activity deep in the brain of people with Parkinson’s often shows a special rhythm called ‘low beta’. However, low beta rhythms are only moderately related to movement difficulties. Here, we show that low beta is just one of several brain rhythms present in Parkinson’s, and that when all rhythms are considered together in a machine learning model, they predict movement difficulties with higher accuracy.

Exaggerated local field potential bursts of activity at frequencies in the low beta band are a well-established phenomenon in the subthalamic nucleus of patients with Parkinson's disease. However, such activity is only moderately correlated with motor impairment. Here we test the hypothesis that beta bursts are just one of several dynamic states in the subthalamic nucleus local field potential in Parkinson's disease, and that together these different states predict motor impairment with high fidelity. Local field potentials were recorded in 32 patients (64 hemispheres) undergoing deep brain stimulation surgery targeting the subthalamic nucleus. Recordings were performed following overnight withdrawal of anti-parkinsonian medication, and after administration of levodopa. Local field potentials were analysed using hidden Markov modelling to identify transient spectral states with frequencies under 40 Hz. Findings in the low beta frequency band were similar to those previously reported; levodopa reduced occurrence rate and duration of low beta states, and the greater the reductions, the greater the improvement in motor impairment. However, additional local field potential states were distinguished in the theta, alpha and high beta bands, and these behaved in an opposite manner. They were increased in occurrence rate and duration by levodopa, and the greater the increases, the greater the improvement in motor impairment. In addition, levodopa favoured the transition of low beta states to other spectral states. When all local field potential states and corresponding features were considered in a multivariate model it was possible to predict 50% of the variance in patients' hemibody impairment OFF medication, and in the change in hemibody impairment following levodopa. This only improved slightly if signal amplitude or gamma band features were also included in the multivariate model. In addition, it compares with a prediction of only 16% of the variance when using beta bursts alone. We conclude that multiple spectral states in the subthalamic nucleus local field potential have a bearing on motor impairment, and that levodopa-induced shifts in the balance between these states can predict clinical change with high fidelity. This is important in suggesting that some states might be upregulated to improve parkinsonism and in suggesting how local field potential feedback can be made more informative in closed-loop deep brain stimulation systems. 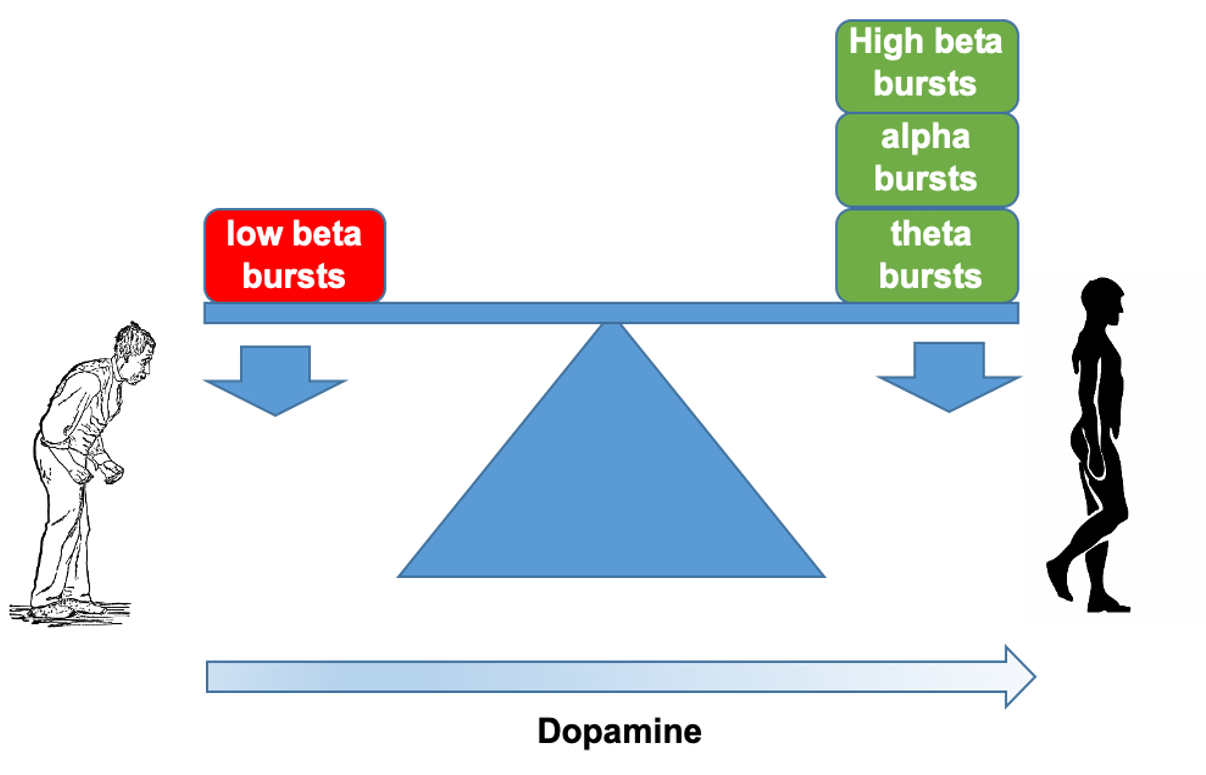