To move, parts of our brain called the cortex and thalamus must communicate with each other. Some communication is done using brain waves known as “beta activity”. For optimal movement, beta activity should switch between low and high levels – an important property which is reduced during Parkinson’s. Here, we created a computer model to understand how the cortex and thalamus in Parkinson’s controls the switch from low to high beta levels.

Parkinson's disease (PD) is a neurodegenerative condition in which aberrant oscillatory synchronization of neuronal activity at beta frequencies (15-35 Hz) across the cortico-basal ganglia-thalamocortical circuit is associated with debilitating motor symptoms, such as bradykinesia and rigidity. Mounting evidence suggests that the magnitude of beta synchrony in the parkinsonian state fluctuates over time, but the mechanisms by which thalamocortical circuitry regulates the dynamic properties of cortical beta in PD are poorly understood. Using the recently developed generic Dynamic Causal Modelling (DCM) framework, we recursively optimized a set of plausible models of the thalamocortical circuit (n = 144) to infer the neural mechanisms that best explain the transitions between low and high beta power states observed in recordings of field potentials made in the motor cortex of anesthetized Parkinsonian rats. Bayesian model comparison suggests that upregulation of cortical rhythmic activity in the beta-frequency band results from changes in the coupling strength both between and within the thalamus and motor cortex. Specifically, our model indicates that high levels of cortical beta synchrony are mainly achieved by a delayed (extrinsic) input from thalamic relay cells to deep pyramidal cells and a fast (intrinsic) input from middle pyramidal cells to superficial pyramidal cells. From a clinical perspective, our study provides insights into potential therapeutic strategies that could be utilized to modulate the network mechanisms responsible for the enhancement of cortical beta in PD. Specifically, we speculate that cortical stimulation aimed to reduce the enhanced excitatory inputs to either the superficial or deep pyramidal cells could be a potential non-invasive therapeutic strategy for PD. 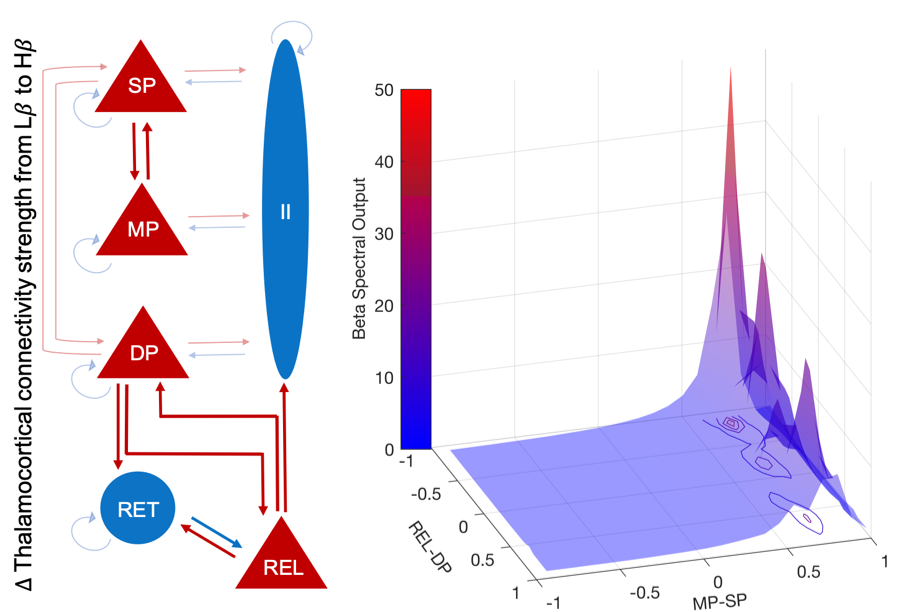