Beta burst coupling across the motor circuit in Parkinson's disease.

In people with Parkinson’s, recordings of nerve cell activity from deep brain stimulation electrodes often show long bursts of special waves or ‘beta oscillations’ that are linked to symptoms. Here, we show that these long bursts tend to simultaneously spread through several parts of brain circuits controlling movement, increasing their impact on healthy information processing by nerve cells.

Exaggerated activity in the beta band (13-35 Hz) is a hallmark of basal ganglia signals in patients with Parkinson's disease (PD). Beta activity however is not constantly elevated, but comes in bursts. In previous work we showed that the longer beta bursts are maintained, the more the oscillatory synchronisation within the subthalamic nucleus (STN) increases, which is posited to limit the information coding capacity of local circuits. Accordingly, a higher incidence of longer bursts correlates positively with clinical impairment, while the opposite is true for short, more physiological bursts. Here, we test the hypothesis that beta bursts not only indicate local synchronisation within the STN, but also phasic coupling across the motor network and hence entail an even greater restriction of information coding capacity in patients with PD. Local field potentials from the subthalamic nucleus and EEG over the motor cortex area were recorded in nine PD patients after temporary lead externalization after surgery for deep brain stimulation and overnight withdrawal of levodopa. Beta bursts were defined as periods exceeding the 75th percentile of signal amplitude and the coupling between bursts was considered using two distinct measurements, first the % overlapping (%OVL) as a feature of the amplitude coupling and secondly the phase synchrony index (PSI) to measure the phase coupling between regions. %OVL between STN and cortex and between the left and the right STN was higher than expected between the regions than if they had been independent. Similarly, PSI was higher during bursts as opposed to non-bursts periods. In addition, %OVL was greater for long compared to short bursts. Our results support the hypothesis that beta bursts involve long-range coupling between structures in the basal ganglia-cortical network. The impact of this is greater during long as opposed to short duration beta bursts. Accordingly, we posit that episodes of simultaneously elevated coupling across multiple structures in the basal ganglia-cortical circuit further limit information coding capacity and may have further impact upon motor impairment. 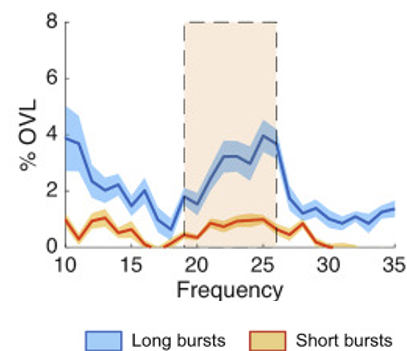