Propagation of beta/gamma rhythms in the cortico-basal ganglia circuits of the parkinsonian rat.

The chemical dopamine helps organise brain activity. With reduced dopamine, as in Parkinson’s disease, nerve cells generate improper electrical signals, including rhythms. Here, we present a new analysis of brain rhythms in a rodent model of Parkinson’s. We find that rhythms vary along different connections within and between areas of the brain called the basal ganglia and their partner circuits.

Much of the motor impairment associated with Parkinson's disease is thought to arise from pathological activity in the networks formed by the basal ganglia (BG) and motor cortex. To evaluate several hypotheses proposed to explain the emergence of pathological oscillations in parkinsonism, we investigated changes to the directed connectivity in BG networks following dopamine depletion. We recorded local field potentials (LFPs) in the cortex and basal ganglia of rats rendered parkinsonian by injection of 6-hydroxydopamine (6-OHDA) and in dopamine-intact controls. We performed systematic analyses of the networks using a novel tool for estimation of directed interactions (nonparametric directionality, NPD). We used a "conditioned" version of the NPD analysis that reveals the dependence of the correlation between two signals on a third reference signal. We find evidence of the dopamine dependency of both low-beta (14-20 Hz) and high-beta/low-gamma (20-40 Hz) directed network interactions. Notably, 6-OHDA lesions were associated with enhancement of the cortical "hyperdirect" connection to the subthalamic nucleus (STN) and its feedback to the cortex and striatum. We find that pathological beta synchronization resulting from 6-OHDA lesioning is widely distributed across the network and cannot be located to any individual structure. Furthermore, we provide evidence that high-beta/gamma oscillations propagate through the striatum in a pathway that is independent of STN. Rhythms at high beta/gamma show susceptibility to conditioning that indicates a hierarchical organization compared with those at low beta. These results further inform our understanding of the substrates for pathological rhythms in salient brain networks in parkinsonism. 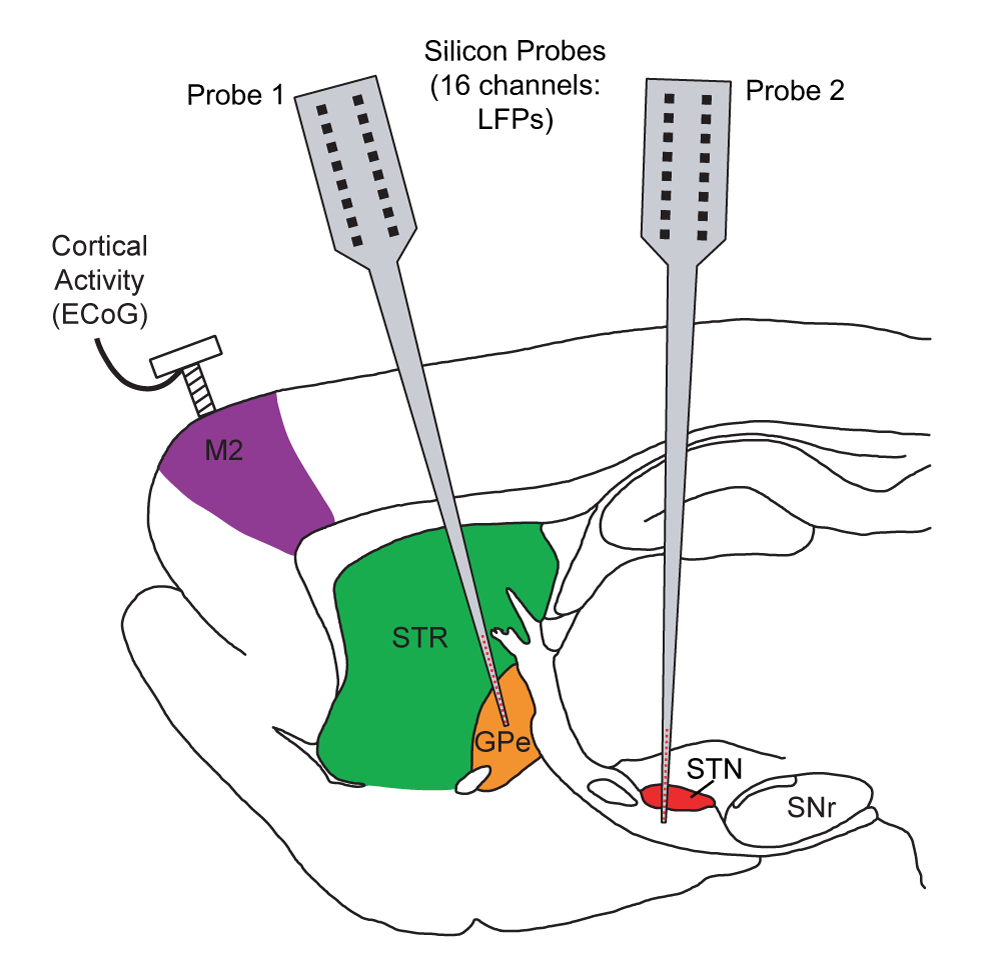 Diagram of the recording configuration used in rats. Electrical signals (local field potentials or LFPs) were recorded from different parts of the basal ganglia (coloured in green, yellow or red) using 2 multi-channel silicon probes; the first probe was targeted to the striatum (STR) and external globus pallidus (GPe), whereas the second probe was targeted to the subthalamic nucleus (STN). Similar electrical signals (electrocorticograms or ECoG) were also recorded with a metal screw positioned over the motor cortex (M2).
Citation
2018. J. Neurophysiol., 119(5):1608-1628.
Free Full Text at Europe PMC
PMC6008089