Cortical connectivity of the nucleus basalis of Meynert in Parkinson's disease and Lewy body dementias.

A structure at the base of the front of the human brain produces an important chemical messenger called acetylcholine that is distributed to different brain regions. Here, we match how this structure is physically connected to other brain regions with the electrical activity in these linked brain regions. In this way, we identify some key brain networks supporting movement, memory and vision.

Parkinson's disease dementia (PDD) and dementia with Lewy bodies (DLB) are related conditions that are associated with cholinergic system dysfunction. Dysfunction of the nucleus basalis of Meynert (NBM), a basal forebrain structure that provides the dominant source of cortical cholinergic innervation, has been implicated in the pathogenesis of both PDD and DLB. Here we leverage the temporal resolution of magnetoencephalography with the spatial resolution of MRI tractography to explore the intersection of functional and structural connectivity of the NBM in a unique cohort of PDD and DLB patients undergoing deep brain stimulation of this structure. We observe that NBM-cortical structural and functional connectivity correlate within spatially and spectrally segregated networks including: (i) a beta band network to supplementary motor area, where activity in this region was found to drive activity in the NBM; (ii) a delta/theta band network to medial temporal lobe structures encompassing the parahippocampal gyrus; and (iii) a delta/theta band network to visual areas including lingual gyrus. These findings reveal functional networks of the NBM that are likely to subserve important roles in motor control, memory and visual function, respectively. Furthermore, they motivate future studies aimed at disentangling network contribution to disease phenotype. 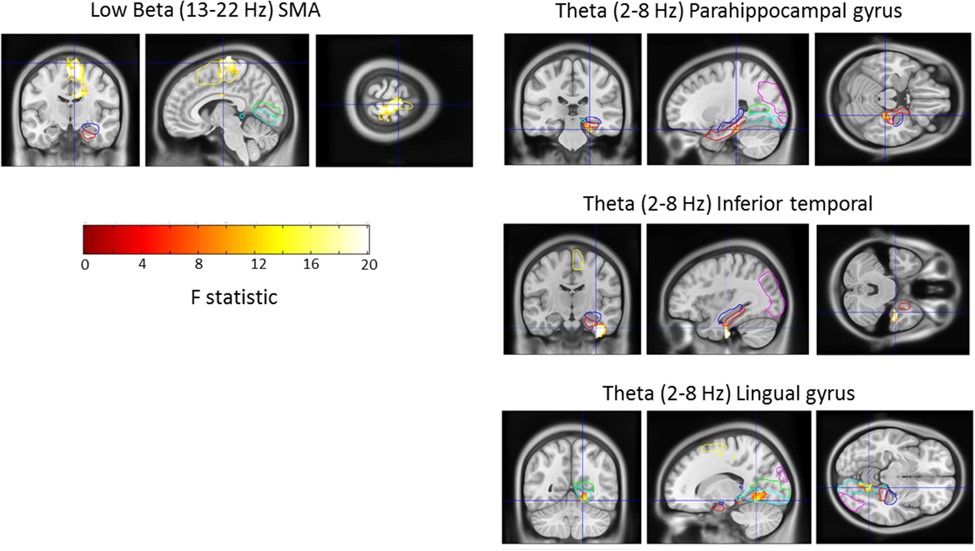