It can be important to react quickly to unpredictable events that require us to stop moving. We discovered that regular movements were interrupted more successfully when they followed a certain pattern of brain activity. Because this pattern is often disturbed in Parkinson’s disease, our results may help explain some of the difficulties that patients experience in the control of stopping movement.

Voluntary movements are followed by a post-movement electroencephalography (EEG) beta rebound, which increases with practice and confidence in a task. We hypothesized that greater beta modulation reflects less load on cognitive resources and may thus be associated with faster reactions to new stimuli. EEG was recorded in 17 healthy subjects during rhythmically paced index finger tapping. In a STOP condition, participants had to interrupt the upcoming tap in response to an auditory cue, which was timed such that stopping was successful only in ~ 50% of all trials. In a second condition, participants carried on tapping twice after the stop signal (CONTINUE condition). Thus the conditions were distinct in whether abrupt stopping was required as a second task. Modulation of 12-20 Hz power over motor and parietal areas developed with time on each trial and more so in the CONTINUE condition. Reduced modulation in the STOP condition went along with reduced negative mean asynchronies suggesting less confident anticipation of the timing of the next tap. Yet participants were more likely to stop when beta modulation prior to the stop cue was more pronounced. In the STOP condition, expectancy of the stop signal may have increased cognitive load during movement execution given that the task might have to be stopped abruptly. However, within this condition, stopping ability was increased if the preceding tap was followed by a relatively larger beta increase. Significant, albeit weak, correlations confirmed that increased post-movement beta power was associated with faster reactions to new stimuli, consistent with reduced cognitive load. 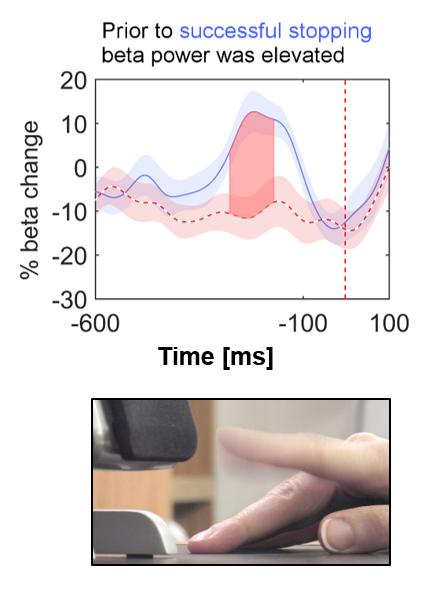 The stop signal (red vertical line) instructed the participant to interrupt the upcoming finger tap. When beta activity in the brain was relatively high, stopping was more successful.
Citation