In Parkinson’s disease, brief episodes (or ‘bursts’) of a specific pattern of brain waves are associated with difficulty in moving. Here, we show that these bursts restrict the ability of a nerve cell circuit in the brain to signal relevant information about intended movements.

Whilst exaggerated bursts of beta frequency band oscillatory synchronization in the subthalamic nucleus have been associated with motor impairment in Parkinson's disease, a plausible mechanism linking the two phenomena has been lacking. Here we test the hypothesis that increased synchronization denoted by beta bursting might compromise information coding capacity in basal ganglia networks. To this end we recorded local field potential activity in the subthalamic nucleus of 18 patients with Parkinson's disease as they executed cued upper and lower limb movements. We used the accuracy of local field potential-based classification of the limb to be moved on each trial as an index of the information held by the system with respect to intended action. Machine learning using the naïve Bayes conditional probability model was used for classification. Local field potential dynamics allowed accurate prediction of intended movements well ahead of their execution, with an area under the receiver operator characteristic curve of 0.80 ± 0.04 before imperative cues when the demanded action was known ahead of time. The presence of bursts of local field potential activity in the alpha, and even more so, in the beta frequency band significantly compromised the prediction of the limb to be moved. We conclude that low frequency bursts, particularly those in the beta band, restrict the capacity of the basal ganglia system to encode physiologically relevant information about intended actions. The current findings are also important as they suggest that local subthalamic activity may potentially be decoded to enable effector selection, in addition to force control in restorative brain-machine interface applications. 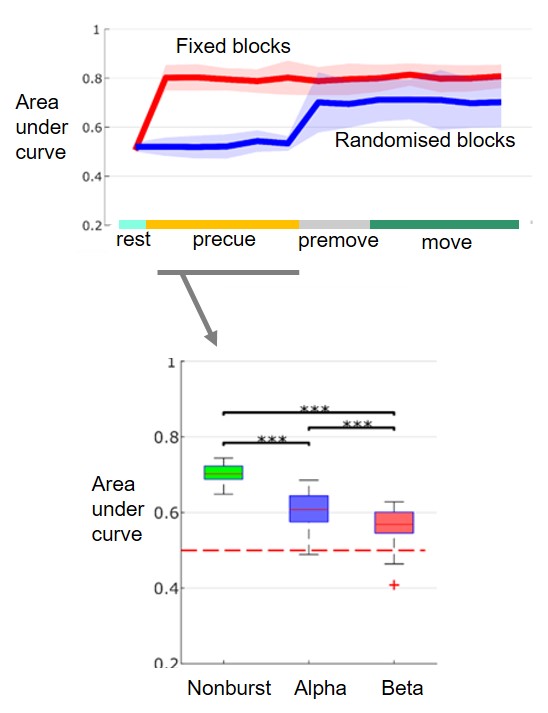 The top panel shows the area under the curve when patients with Parkinson’s make voluntary movements in response to a cue. The area under the curve is a proxy for the information about forthcoming movements expressed in the local field potential recorded from the subthalamic nucleus. In fixed blocks, patients are informed about the nature of the cued movement at the beginning of the block of trials. In randomised blocks, patients have to wait of for the cue to know which movement to make. The lower panel shows that bursts of beta oscillations in the local field potential degrade the information about forthcoming movements recorded in the precue period in fixed blocks.
Citation
2020. Brain, 143(2):582-596.
Free Full Text at Europe PMC
PMC7009471