Gait-phase modulates alpha and beta oscillations in the pedunculopontine nucleus.

People with Parkinson’s or Multiple System Atrophy often have difficulties with walking or ‘gait’. We discovered that waves of nerve cell activity in a brain area called the pedunculopontine nucleus are modulated by gait phase. Activity modulation was most obvious when gait rhythm was regular. This work suggests brain stimulation mimicking the modulation pattern in this brain area could potentially improve gait in people with these diseases.

The pedunculopontine nucleus (PPN) is a reticular collection of neurons at the junction of the midbrain and pons, playing an important role in modulating posture and locomotion. Deep brain stimulation of the PPN has been proposed as an emerging treatment for patients with Parkinson's disease (PD) or multiple system atrophy (MSA) suffering gait-related atypical parkinsonian syndromes. In this study, we investigated PPN activities during gait to better understand its functional role in locomotion. Specifically, we investigated whether PPN activity is rhythmically modulated by gait cycles during locomotion. PPN local field potential (LFP) activities were recorded from PD or MSA patients suffering from gait difficulties during stepping in place or free walking. Simultaneous measurements from force plates or accelerometers were used to determine the phase within each gait cycle at each time point. Our results showed that activities in the alpha and beta frequency bands in the PPN LFPs were rhythmically modulated by the gait phase within gait cycles, with a higher modulation index when the stepping rhythm was more regular. Meanwhile, the PPN-cortical coherence was most prominent in the alpha band. Both gait-phase related modulation in the alpha/beta power and the PPN-cortical coherence in the alpha frequency band were spatially specific to the PPN and did not extend to surrounding regions. These results suggest that alternating PPN modulation may support gait control. Whether enhancing alternating PPN modulation by stimulating in an alternating fashion could positively affect gait control remains to be tested. 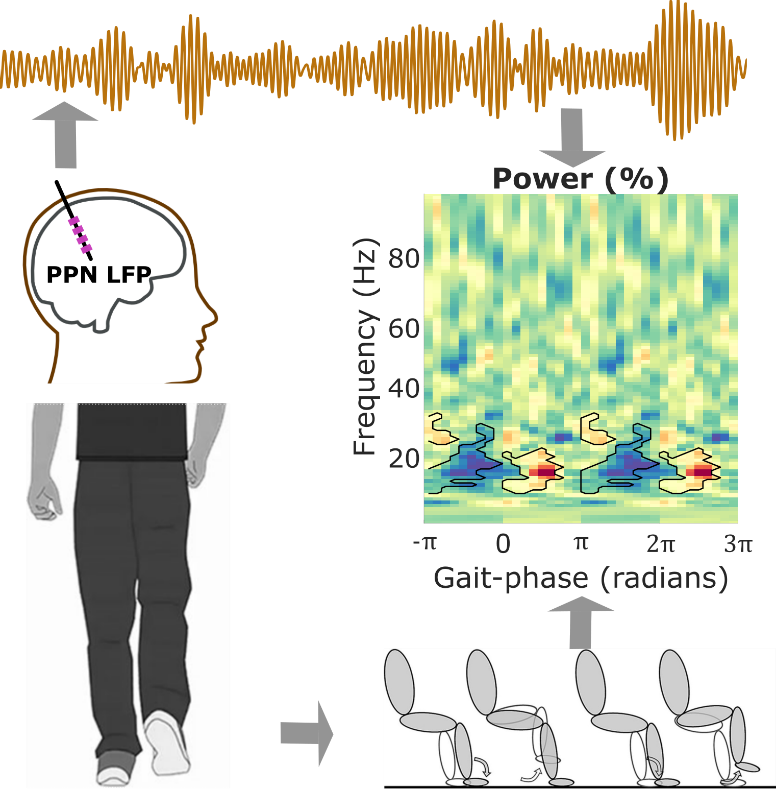 During stepping or free walking by people with Parkinson’s disease or multiple system atrophy, neuronal activity in the alpha-and beta-frequency bands in the pedunculopontine nucleus (PPN) was rhythmically modulated by the gait phase.
Citation
2021. J. Neurosci., 41(40):8390-8402.
Free Full Text at Europe PMC
PMC8496192