People with Parkinson’s (PwP) can have difficulties with walking. Here, we recorded nerve cell activity in the brain while PwP stepped in place along with a cartoon person walking in a video. We found that brain waves varied in time with stepping, alternating between left and right sides. Our results raise the possibility that alternating brain stimulation may be useful for improving gait in PwP.

Gait disturbances in Parkinson's disease are commonly refractory to current treatment options and majorly impair patient's quality of life. Auditory cues facilitate gait and prevent motor blocks. We investigated how neural dynamics in the human subthalamic nucleus of Parkinsons's disease patients (14 male, 2 female) vary during stepping and whether rhythmic auditory cues enhance the observed modulation. Oscillations in the beta band were suppressed after ipsilateral heel strikes, when the contralateral foot had to be raised, and reappeared after contralateral heel strikes, when the contralateral foot rested on the floor. The timing of this 20-30 Hz beta modulation was clearly distinct between the left and right subthalamic nucleus, and was alternating within each stepping cycle. This modulation was similar, whether stepping movements were made while sitting, standing, or during gait, confirming the utility of the stepping in place paradigm. During stepping in place, beta modulation increased with auditory cues that assisted patients in timing their steps more regularly. Our results suggest a link between the degree of power modulation within high beta frequency bands and stepping performance. These findings raise the possibility that alternating deep brain stimulation patterns may be superior to constant stimulation for improving parkinsonian gait. 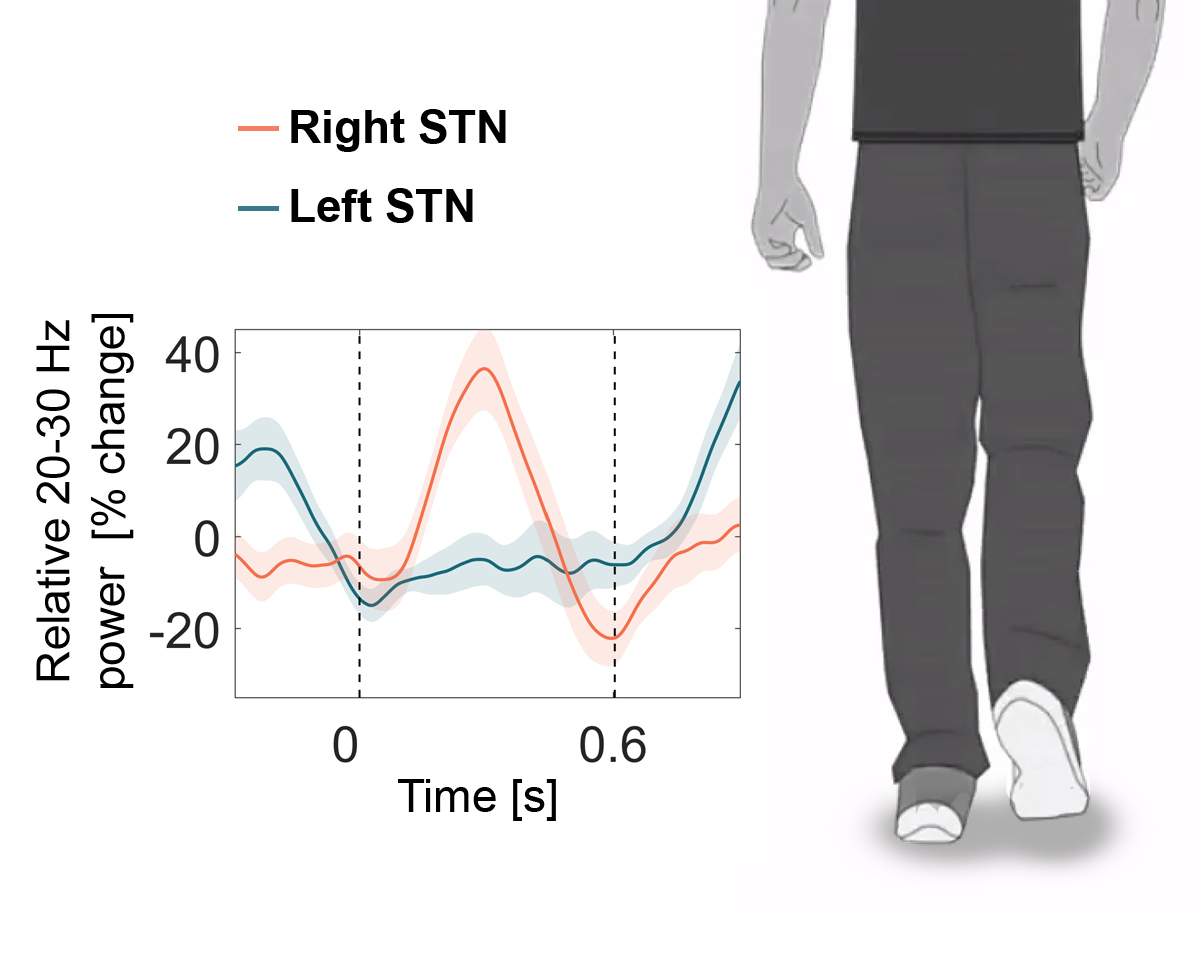 People with Parkinson’s stepped in place along with a cartoon man in a video (a screenshot of the video is displayed to the right). Brain activity was recorded from the subthalamic nucleus (STN) and showed that electrical waves occurring at 20-30 times per second (Hz) – so called ‘beta activity’ - alternated between the left and right STN (blue and red line) with the stepping movement.
Citation
2018. J. Neurosci., 38(22):5111-5121.
Free Full Text at Europe PMC
PMC5977446