Essential Tremor is one of the most common movement disorders in the world, and yet, it lacks efficient and widely-available treatment options. This study works towards bridging this gap by exploring whether non-invasive peripheral nerve stimulation can modulate tremor in a patient-specific manner.

Essential tremor is a common neurological disorder, characterised by involuntary shaking of a limb. Patients are usually treated using medications which have limited effects on tremor and may cause side-effects. Surgical therapies are effective in reducing essential tremor, however, the invasive nature of these therapies together with the high cost, greatly limit the number of patients benefiting from them. Non-invasive therapies have gained increasing traction to meet this clinical need. Here, we test a non-invasive and closed-loop electrical stimulation paradigm which tracks peripheral tremor and targets thalamic afferents to modulate the central oscillators underlying tremor. To this end, 9 patients had electrical stimulation delivered to the median nerve locked to different phases of tremor. Peripheral stimulation induced a subtle but significant modulation in five out of nine patients-this modulation consisted mainly of amplification rather than suppression of tremor amplitude. Modulatory effects of stimulation were more pronounced when patient's tremor was spontaneously weaker at stimulation onset, when significant modulation became more frequent amongst subjects. This data suggests that for selected individuals, a more sophisticated control policy entailing an online estimate of both tremor phase and amplitude, should be considered in further explorations of the treatment potential of tremor phase-locked peripheral stimulation. 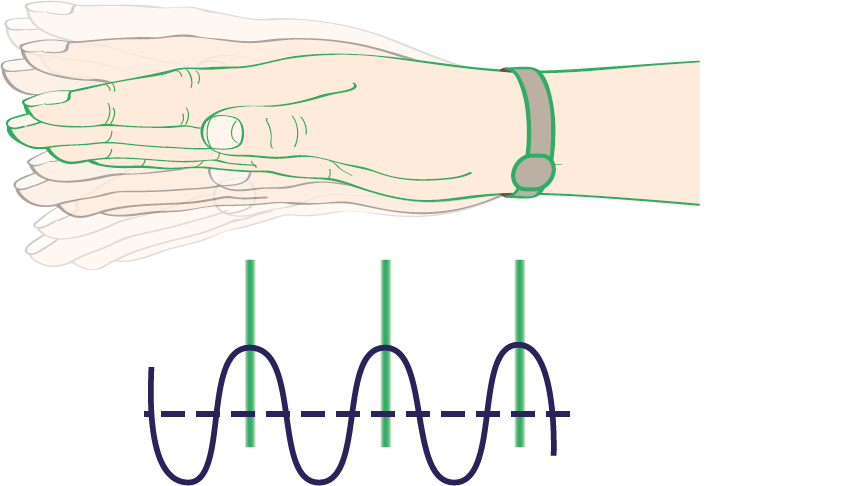 Phase-specific stimulation of median nerve. The bracelet at the patient’s wrist is used to sense and control single-pulse electrical stimulation delivered to the median nerve. We explore whether locking the electrical pulse to a particular phase of the patient’s tremor (green dashes in blue sinusoidal wave) is efficient in inducing a change in the severity of tremor.
Citation
2021. Sci. Rep., 11(1):17720.
Free Full Text at Europe PMC
PMC8421420