The activity of brain nerve cells forms a "code” that informs how we adapt to the world. Here, we show that some cells encode information as an emergent property of their combined, precisely synchronized activity. By manipulating how neurons communicate, we show that this 'coactivity code' is needed for dynamic memories that can be rapidly learned and flexibly retrieved.

Neural correlates of external variables provide potential internal codes that guide an animal's behavior. Notably, first-order features of neural activity, such as single-neuron firing rates, have been implicated in encoding information. However, the extent to which higher-order features, such as multineuron coactivity, play primary roles in encoding information or secondary roles in supporting single-neuron codes remains unclear. Here, we show that millisecond-timescale coactivity among hippocampal CA1 neurons discriminates distinct, short-lived behavioral contingencies. This contingency discrimination was unrelated to the tuning of individual neurons, but was instead an emergent property of their coactivity. Contingency-discriminating patterns were reactivated offline after learning, and their reinstatement predicted trial-by-trial memory performance. Moreover, optogenetic suppression of inputs from the upstream CA3 region during learning impaired coactivity-based contingency information in the CA1 and subsequent dynamic memory retrieval. These findings identify millisecond-timescale coactivity as a primary feature of neural firing that encodes behaviorally relevant variables and supports memory retrieval. 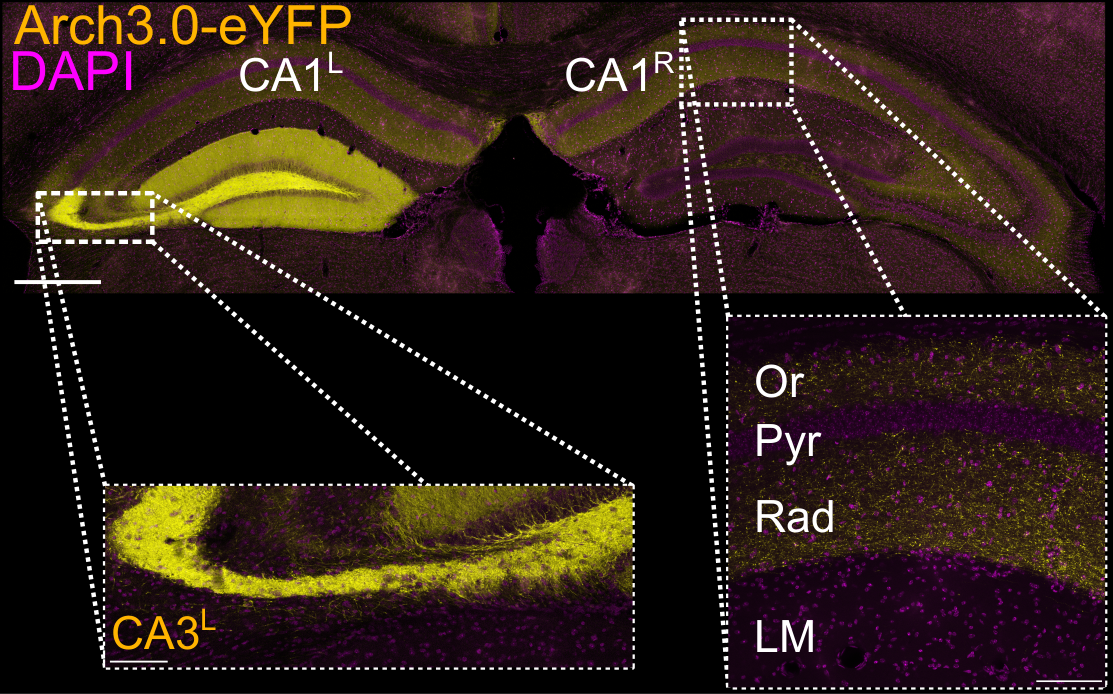 Expression of Archaerhodopsin3.0-eYFP in the somata of left CA3 neurons and their axons in CA1 bilaterally (top), with higher-magnification images of eYFP-expressing CA3 neurons (bottom-left) and their axons in the contralateral CA1 (bottom-right)
Citation
2021. Nat. Neurosci., 24:694-704.
Free Full Text at Europe PMC
PMC7610741