Tremor is a classical symptom of Parkinson's disease, and is readily suppressed by rapid stimulation of a part of the brain called the subthalamic nucleus. A signature nerve-cell activity can be recorded at the site of stimulation that relates to slowness and stiffness in Parkinson’s, but here we show that a different type of activity relates to tremor and is suppressed by stimulation.

OBJECTIVES: Rest tremor is a cardinal symptom of Parkinson's disease (PD), and is readily suppressed by deep brain stimulation (DBS) of the subthalamic nucleus (STN). The therapeutic effect of the latter on bradykinesia and rigidity has been associated with the suppression of exaggerated beta (13-30 Hz) band synchronization in the vicinity of the stimulating electrode, but there is no correlation between beta suppression and tremor amplitude. In the present study, we investigate whether tremor suppression is related to suppression of activities at other frequencies.

MATERIALS AND METHODS: We recorded hand tremor and contralateral local field potential (LFP) activity from DBS electrodes during stimulation of the STN in 15 hemispheres in 11 patients with PD. DBS was applied with increasing voltages starting at 0.5 V until tremor suppression was achieved or until 4.5 V was reached.

CONCLUSIONS: Our findings support a relationship between low gamma oscillations and PD tremor, and reinforce the principle that the subthalamic LFP is a rich signal that may contain information about the severity of multiple different Parkinsonian features. 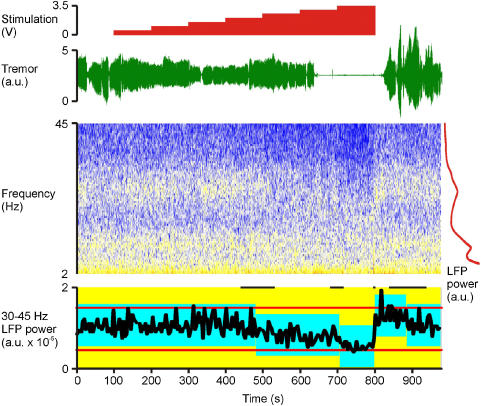