The basal ganglia are involved in motor control and their function deranged in conditions like Parkinson's disease. Scientists have tended to believe that the basal ganglia, and the subthalamic nucleus in particular, help select the appropriate force with which a voluntary movement is made. Here we show that activity in the subthalamic nucleus codes the effort made rather than the force exerted.

Local field potential (LFP) recordings from patients with deep brain stimulation electrodes in the basal ganglia have suggested that frequency-specific activities correlate with force or effort, but previous studies have not been able to disambiguate the two. Here, we dissociated effort from actual force generated by contrasting the force generation of different fingers while recording LFP activity from the subthalamic nucleus (STN) in patients with Parkinson's disease who had undergone functional surgery. Patients were studied while on their normal dopaminergic medication. We investigated the relationship between frequency-specific oscillatory activity in the STN and voluntary flexion of either the index or little finger at different effort levels. At each tested effort level (10%, 25%, and 40% of the maximal voluntary contraction force of each individual finger), the index finger generated larger force than the little finger. Movement-related suppression of beta-band power in the STN LFP was significantly modulated by effort, but not by which finger was used, suggesting that the beta suppression in the STN LFP during sustained contraction serves as a proxy for effort. The absolute force scaled with beta power suppression, but with the scaling determined by the maximal voluntary contraction force of the motor effector. Our results argue against the hypothesis that the basal ganglia are directly involved in the parameterization of force during movement and support a role of the STN in the control of motor effort to be attributed to a response. 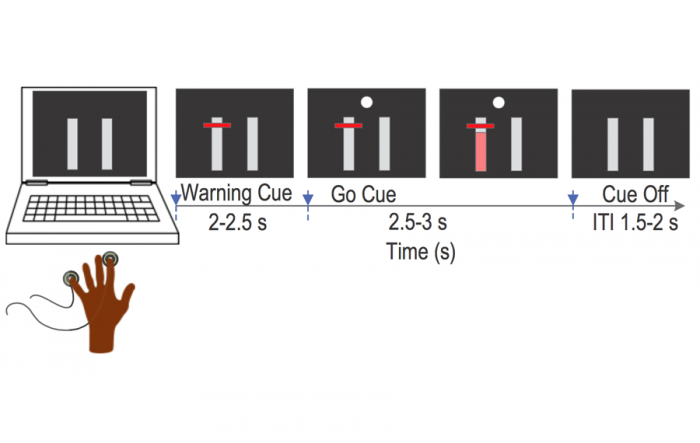 Two vertical bars were presented, with the left and right denoting the little and index finger of the left hand or the index and little finger of the right hand. Filled pink color indicated the pressing force of the responding finger, where a completely filled pink bar indicated 50% of MVC of that finger. The warning cue was a red horizontal line at one of three locations (corresponding to 10%, 25%, and 40% of MVC) on one of the vertical bars, indicating which finger to press and the effort level required. Subjects were asked to press with the correct finger with the appropriate level of effort at the onset of the filled circle go cue and to hold the force until the circle was extinguished.
Citation
2015.J. Neurosci., 35(15):5941-9.
Free Full Text at Europe PMC
PMC4397595