‘Au revoir’ to Jennifer Kaufling as she becomes principal investigator 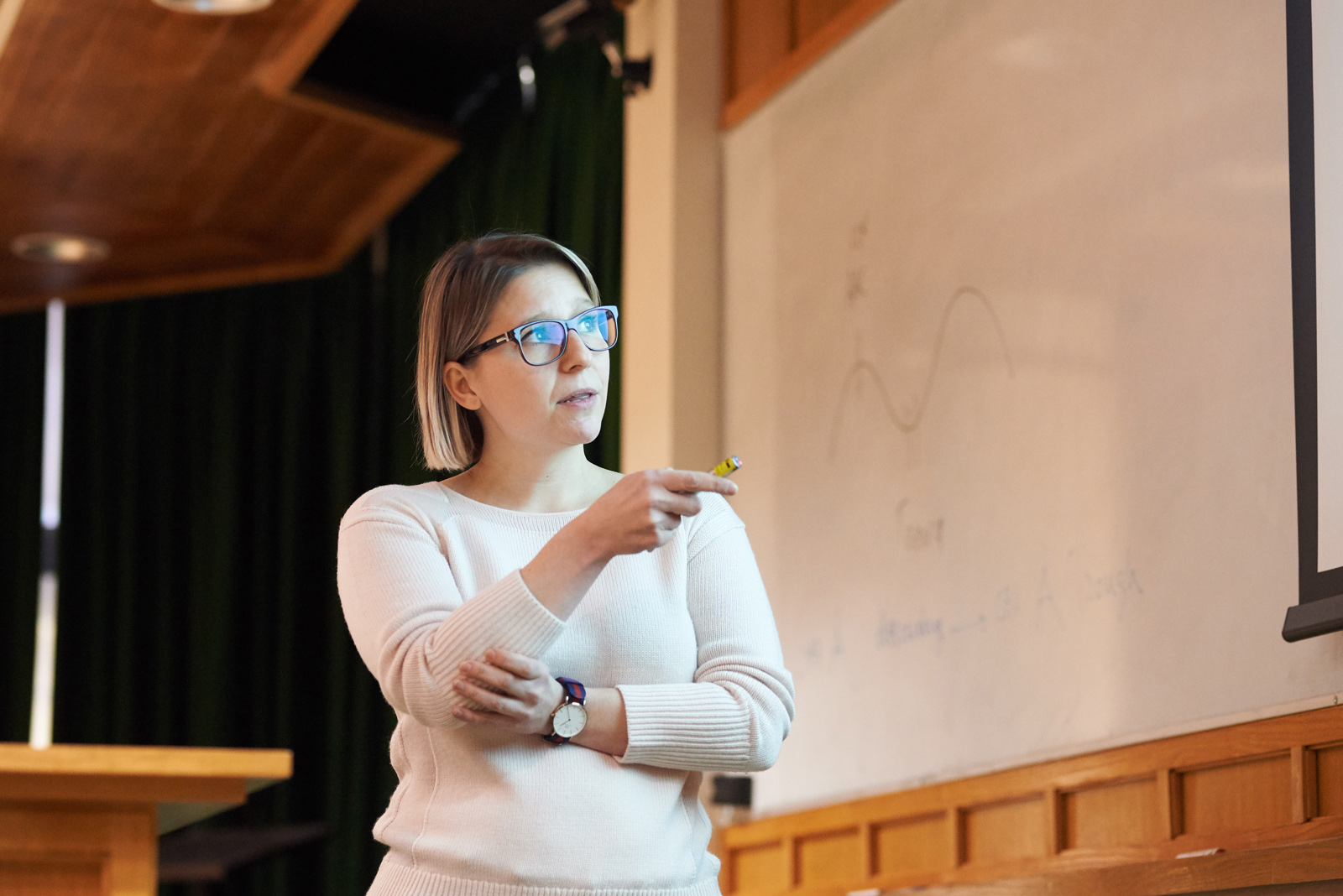 Last week, Unit members gathered to bid a fond farewell to Dr Jennifer Kaufling as she leaves the Unit to take up her new tenured position of principal investigator (Chargé de Recherche) at the Institute of Cellular and Integrative Neurosciences in Strasbourg, France.

Jennifer has been working as part of the Magill Group, where she has spearheaded the development of a powerful in vivo approach for testing the effects of optogenetic manipulations on the electrical activity of identified neurons in the basal ganglia. Her discoveries are of particular importance for understanding the contributions of distinct cell types to neuronal network dynamics in the external globus pallidus.

Jennifer’s mentor, Peter Magill, commented "It has been a pleasure and a privilege to host Jennifer in the Unit for her postdoctoral training and career development. Jenny is a hugely talented neuroscientist and an exemplary collaborator, and I look forward to exploring further opportunities to work together as Jenny establishes her independent research programme in France. We will all miss working with Jenny in the Unit, but it is a comfort to know that it is ‘au revoir’ and not ‘goodbye’." 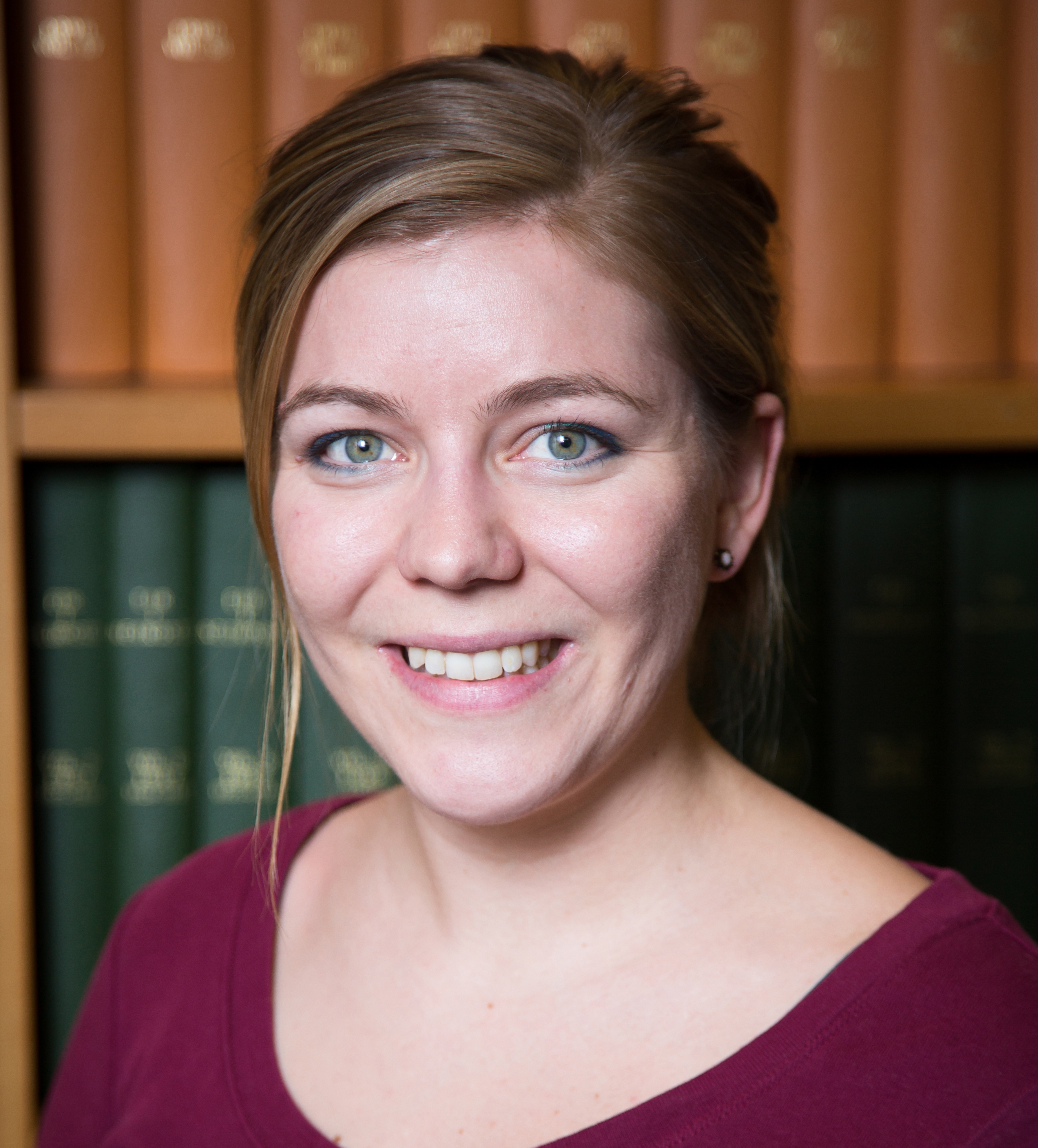 Many congratulations to Unit scientist Dr Natalie Doig on being elected as the next Student & Early Career Representative on the National Advisory Committee of the British Neuroscience Association.

The British Neuroscience Association (BNA) is the largest UK organisation representing and promoting neuroscience and neuroscientists.

Natalie’s new role will include communicating the interests of students and early-career researchers to the Committee, advising the BNA Council on issues and activities of importance to these groups, and working on initiatives to assist BNA members with their career development.

Natalie commented “I am delighted to be given this exciting opportunity to serve on the National Advisory Committee. The BNA plays an important role in building capacity in neuroscience within the UK and beyond. I believe that supporting students and researchers at the beginning of their careers is vital to this. I look forward to playing my part in representing and furthering the interests of these researchers.” 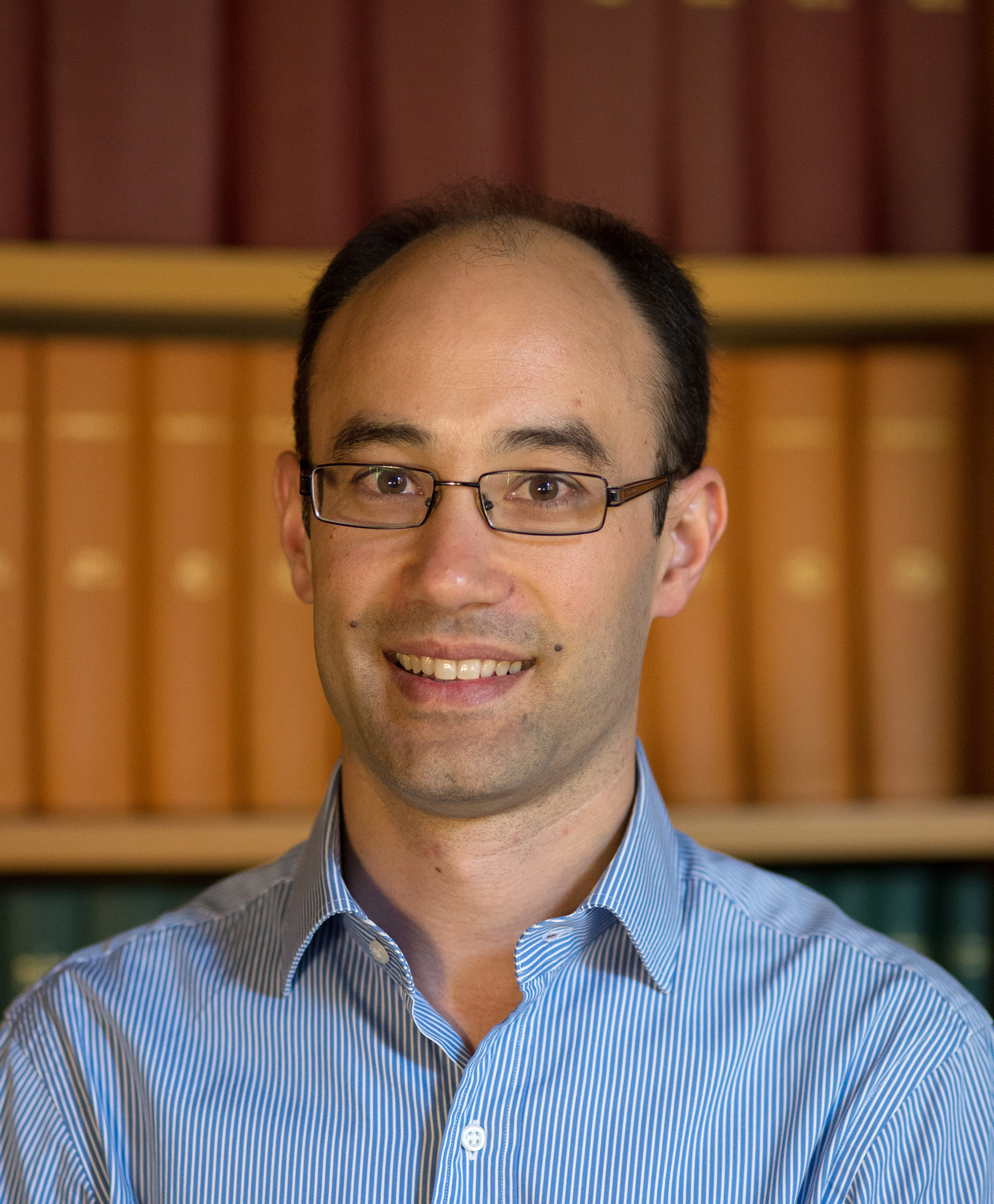 Congratulations to Unit Programme Leader Dr David Dupret who is to receive funding to initiate collaborative work with neuroscience researchers in Canada and Switzerland.

David’s new collaboration is supported by the Oxford-Brain[at]McGill-ZNZ Partnership in Neuroscience, a scheme founded in 2013 to foster research synergies between groups with complementary infrastructure, knowledge and technical expertise. 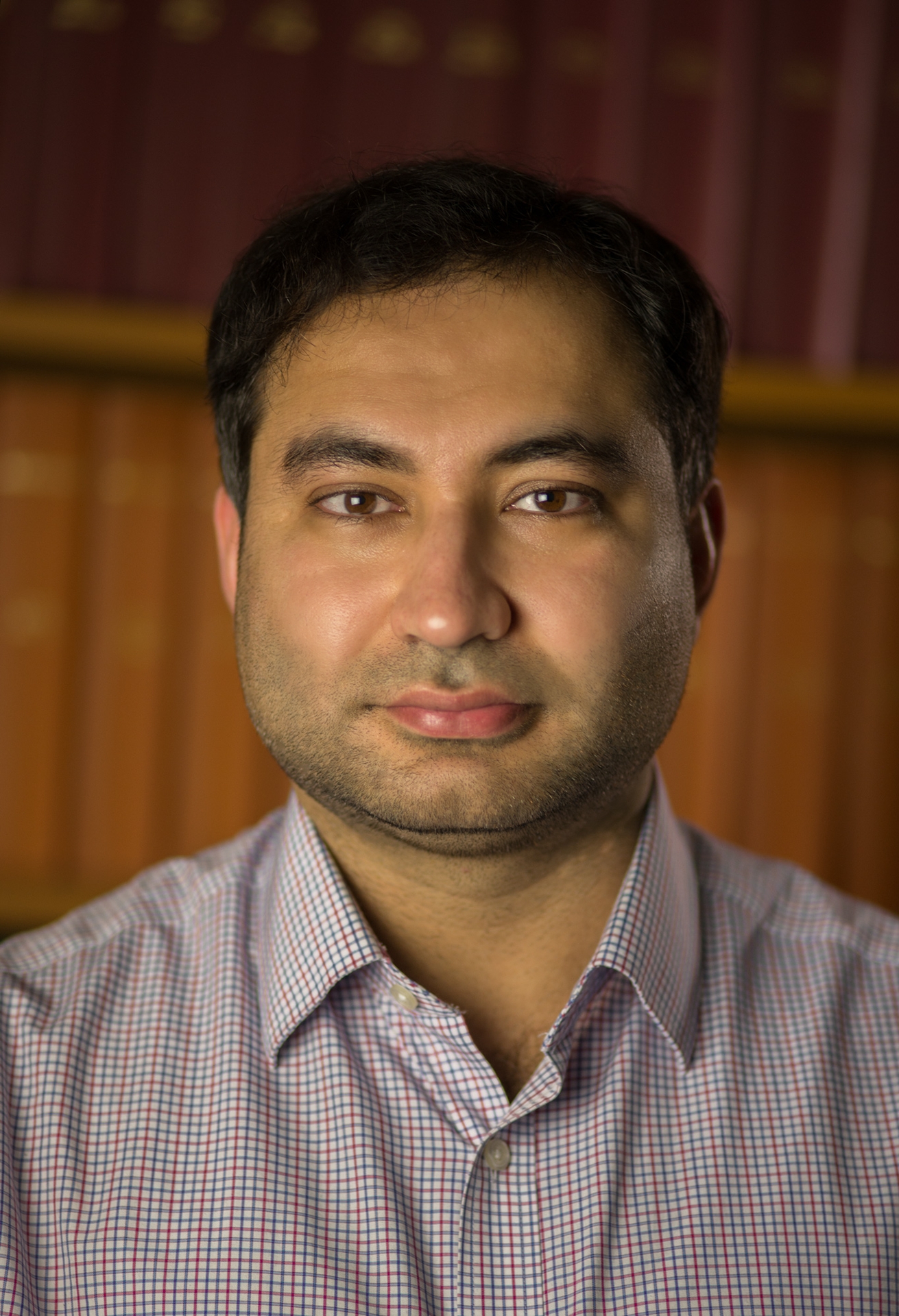 Many congratulations to Unit scientist Dr Syed Ahmar Shah who has been awarded a Chancellor’s Fellowship at the University of Edinburgh. These highly competitive 5-year Fellowships are designed to attract and support talented researchers at the start of their independent academic careers. Ahmar will take up his new post at the Usher Institute of Population Health Sciences and Informatics in July 2018.

Currently, Ahmar is a postdoctoral researcher in Professor Peter Brown’s Group, where he has helped exploit machine learning to decode movement intentions from electrical signals recorded deep in the brain. These advances are being leveraged in the Unit’s ongoing work developing novel brain-computer interfaces that are designed to improve function and communication in people with movement difficulties. In his new post in Edinburgh, Ahmar will focus on applied informatics to aid clinical management and diagnosis.

Unit Director Peter Brown commented: “We are thrilled for Ahmar. His success and transition to independence are a fitting testament to the Unit’s commitment to excellence in the research training and career development of its membership.” 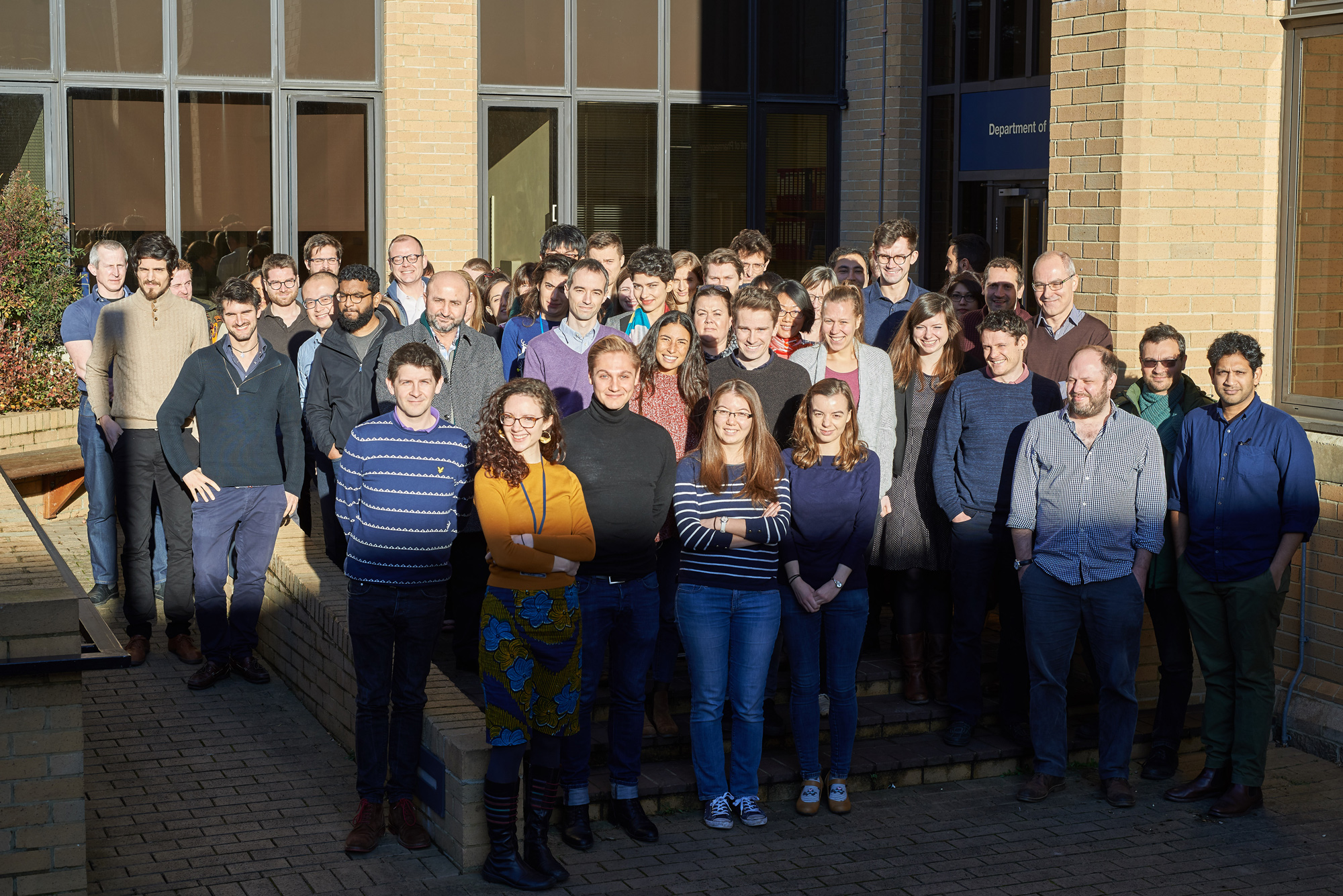 The Unit held its sixth Science Day on Friday 15th December 2017. Ongoing and future research projects were the focus of discussion, and Unit members and visitors enthusiastically took the chance to offer the constructive criticism that is vital for nurturing collaborative, world-leading research.

There were 13 short talks and 7 poster presentations, all of which were given by the Unit’s students and postdoctoral scientists. Attendees were also treated to a Special Lecture on competition and sharing in computational neuroscience by Dr Stephen Eglen from the University of Cambridge.

Unit Director Professor Peter Brown commented “It was inspiring to see how the creative thinking and innovative experiments of the Unit’s early-career scientists are driving back the frontiers of brain research. It was also excellent to hear from Stephen Eglen as the Unit prepares for the launch of its new resource for open science and data sharing.” 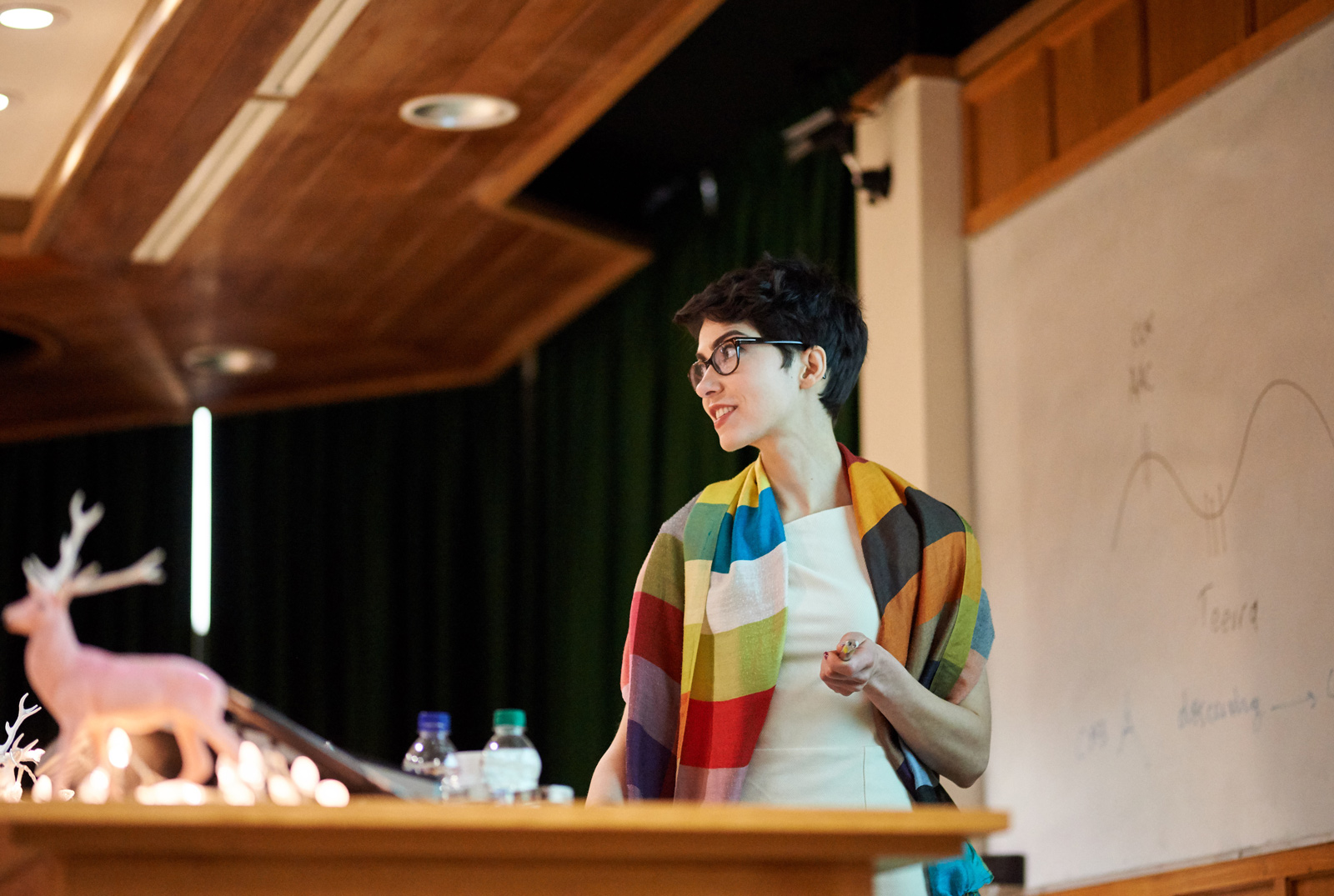 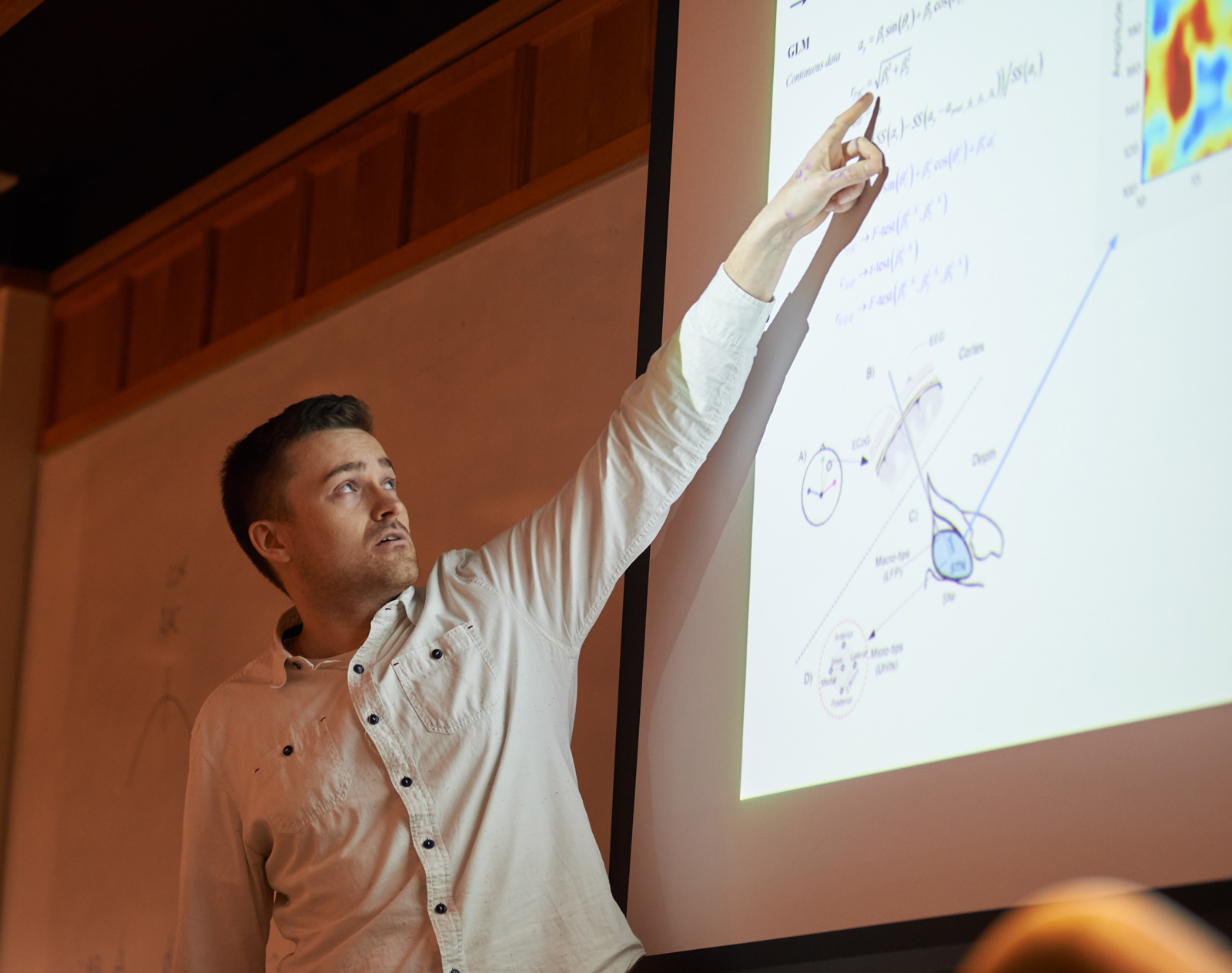 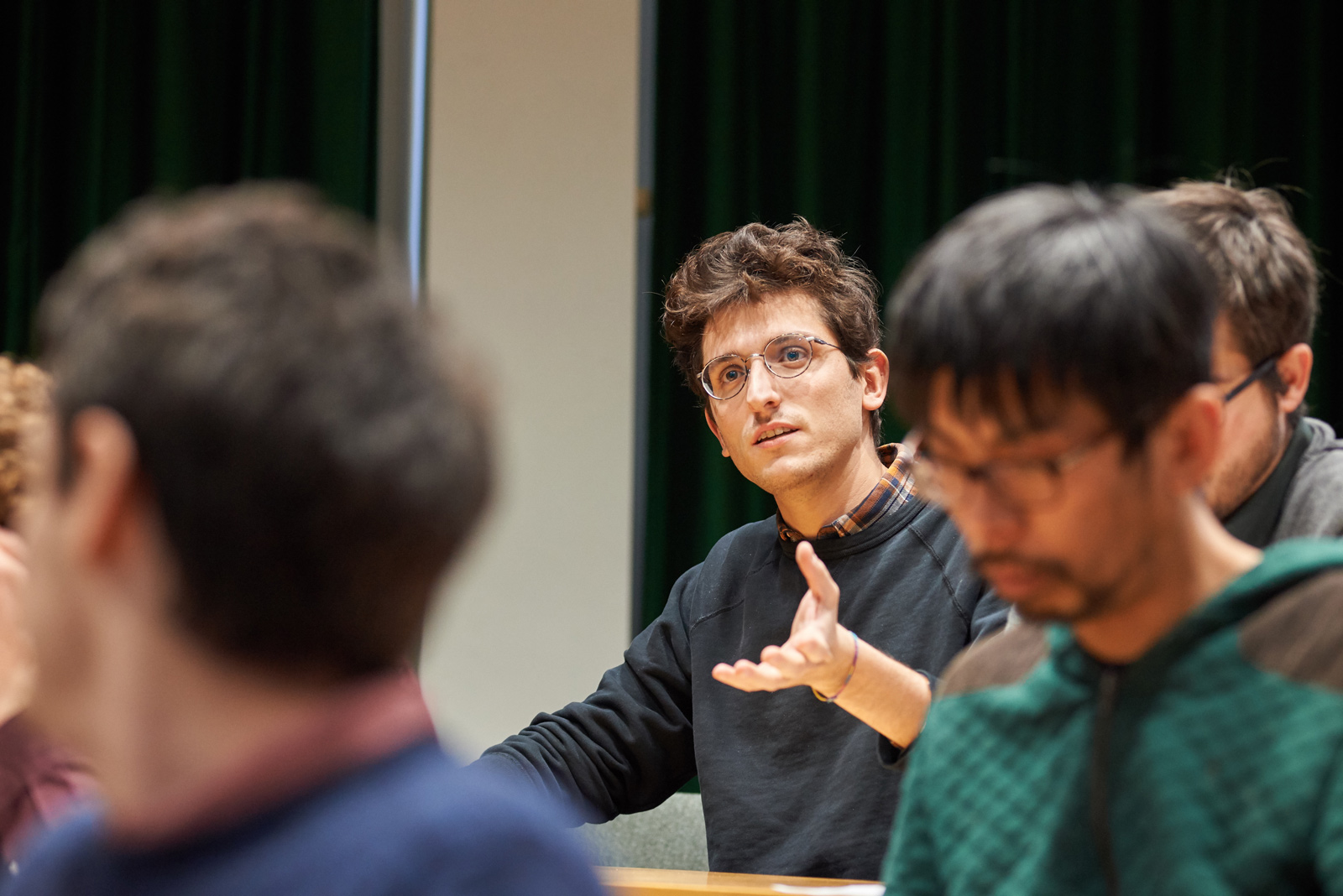 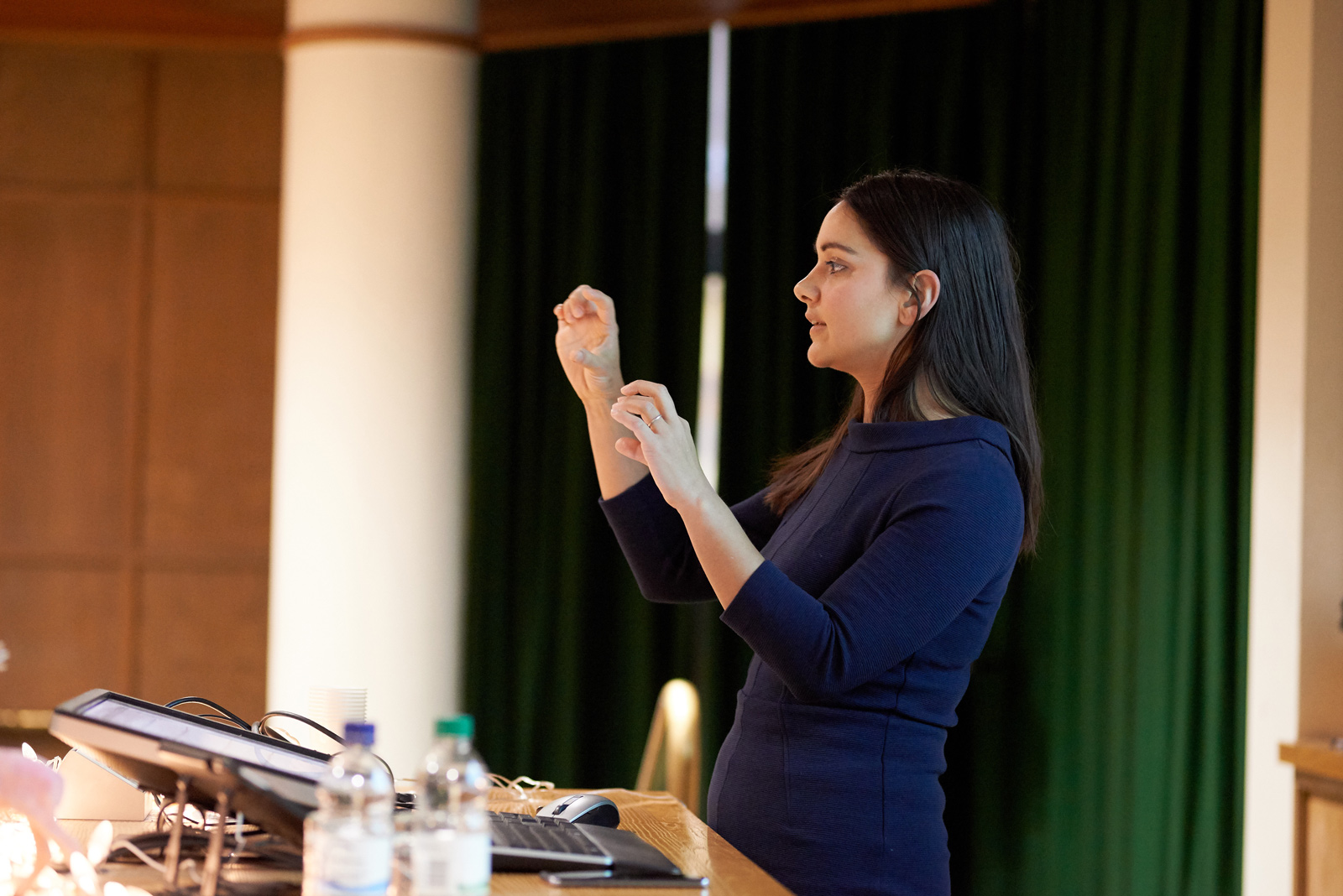 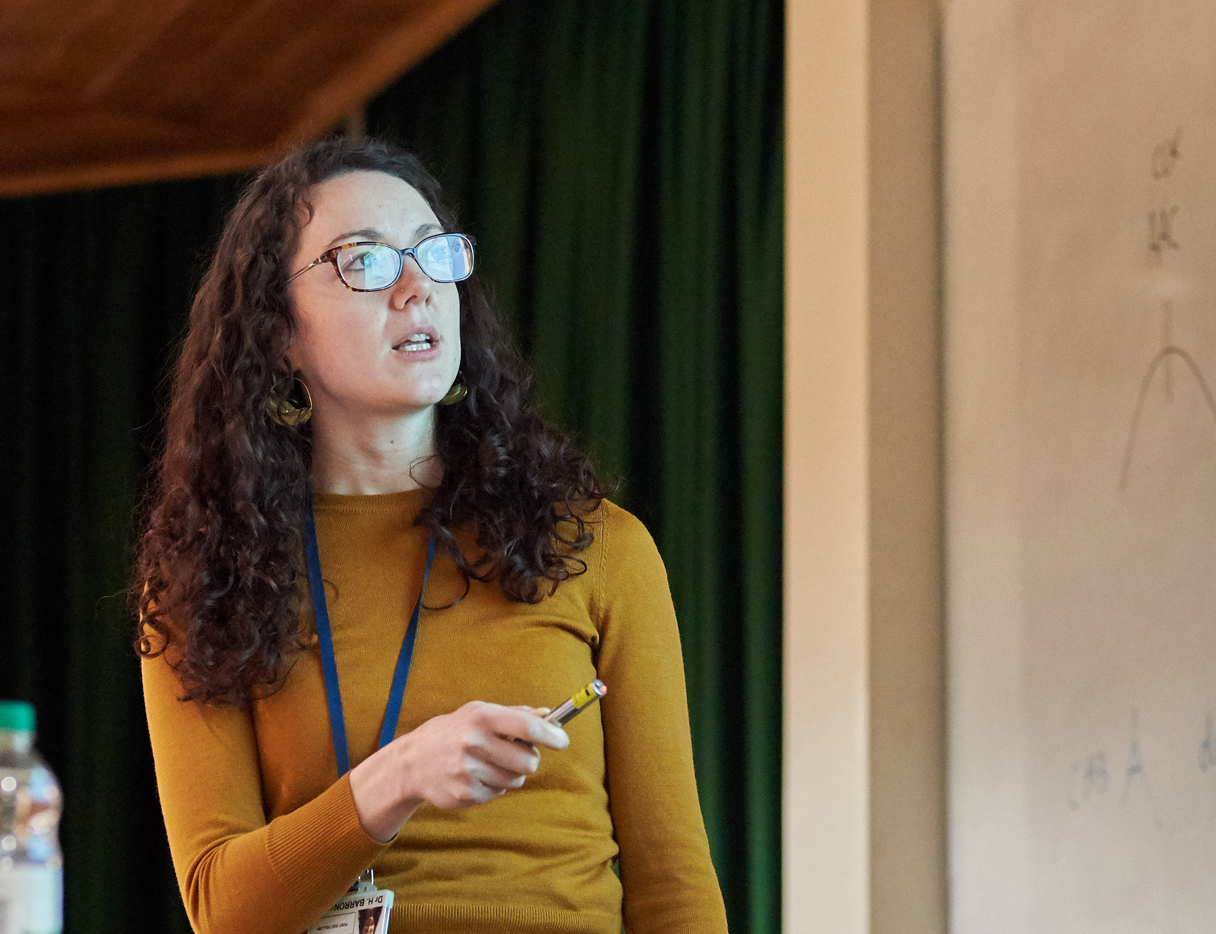 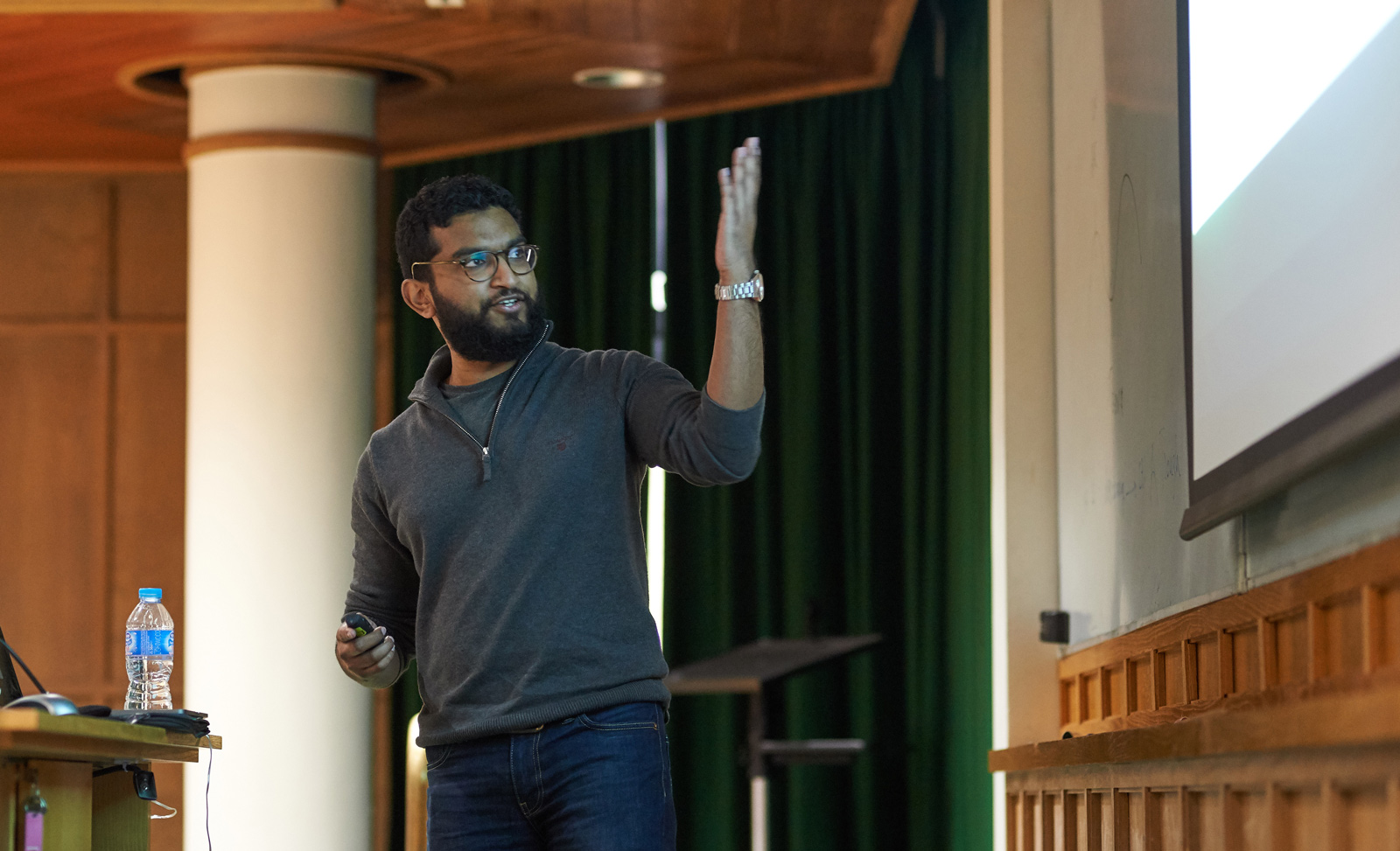 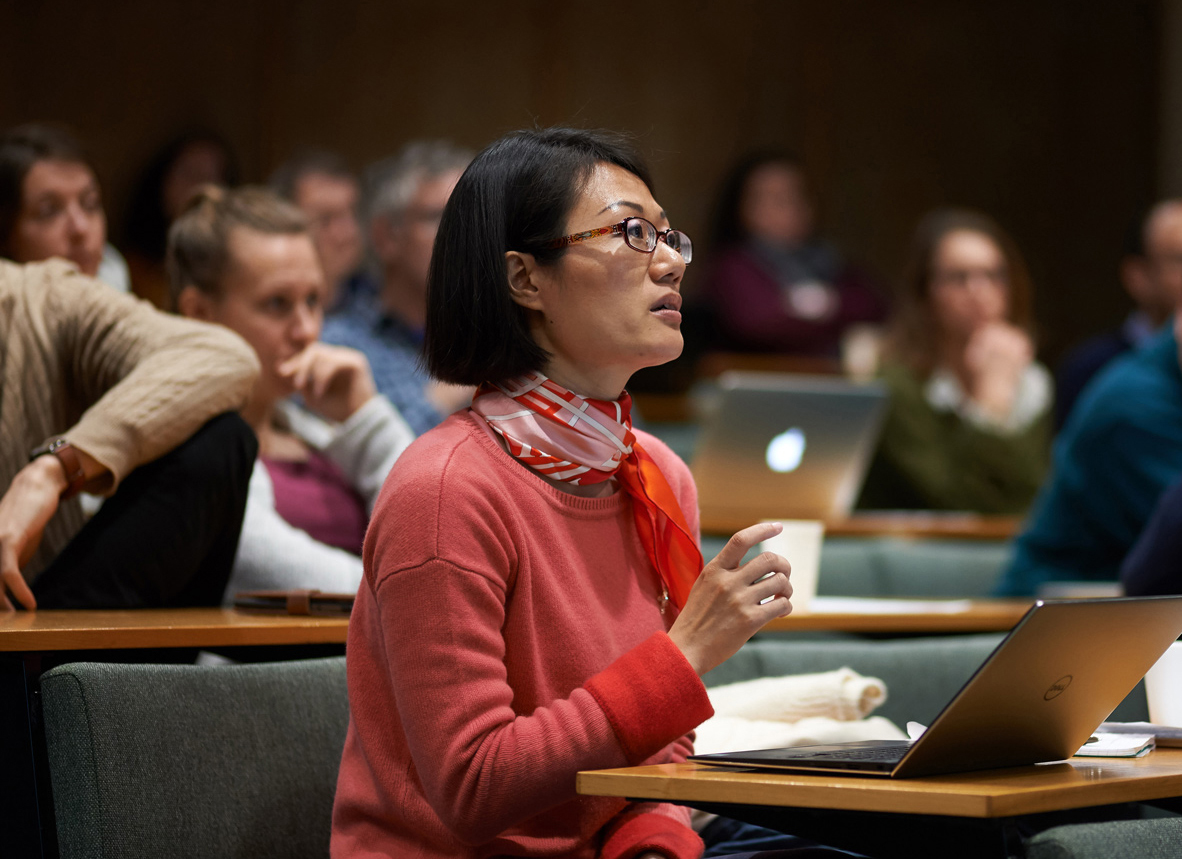 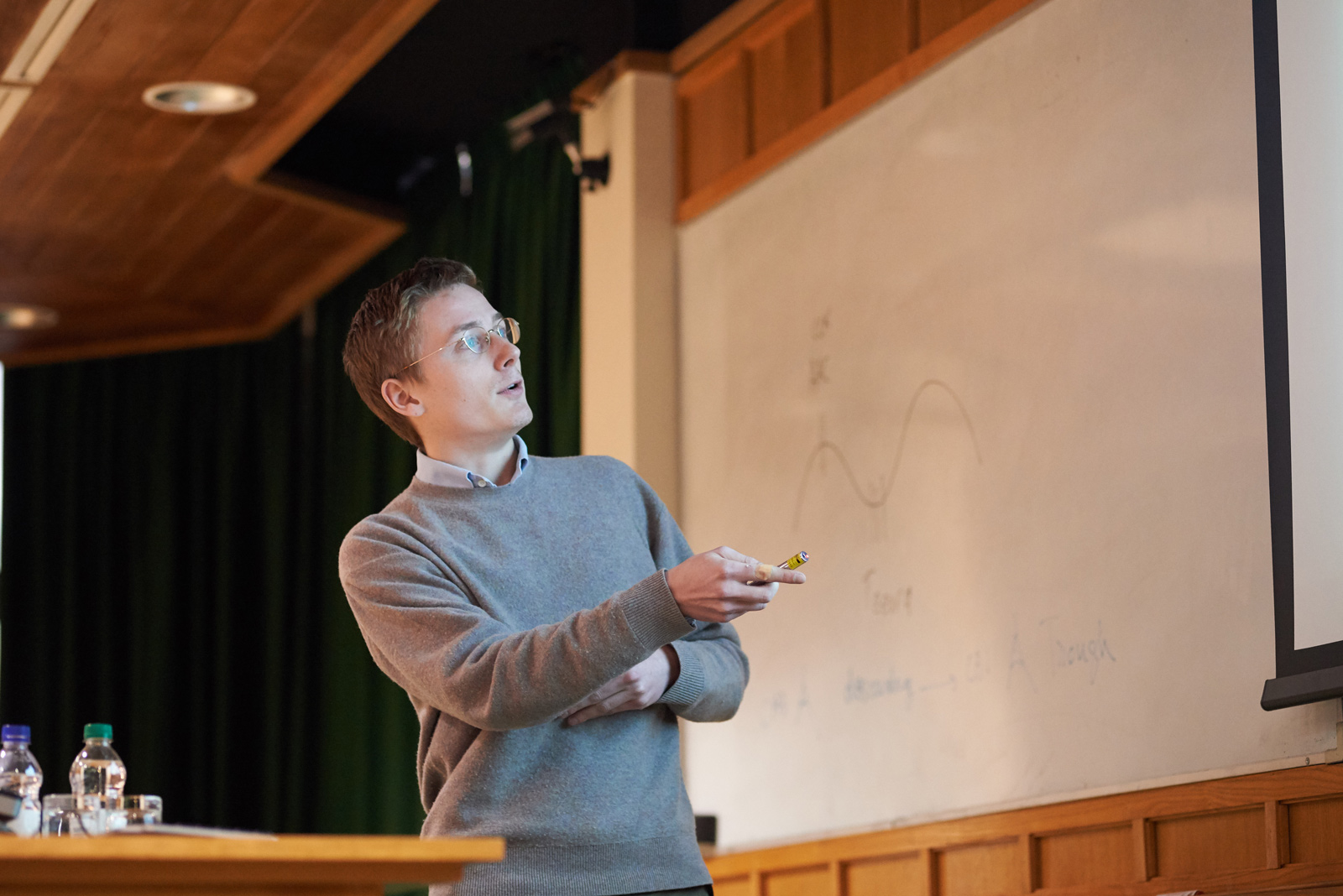 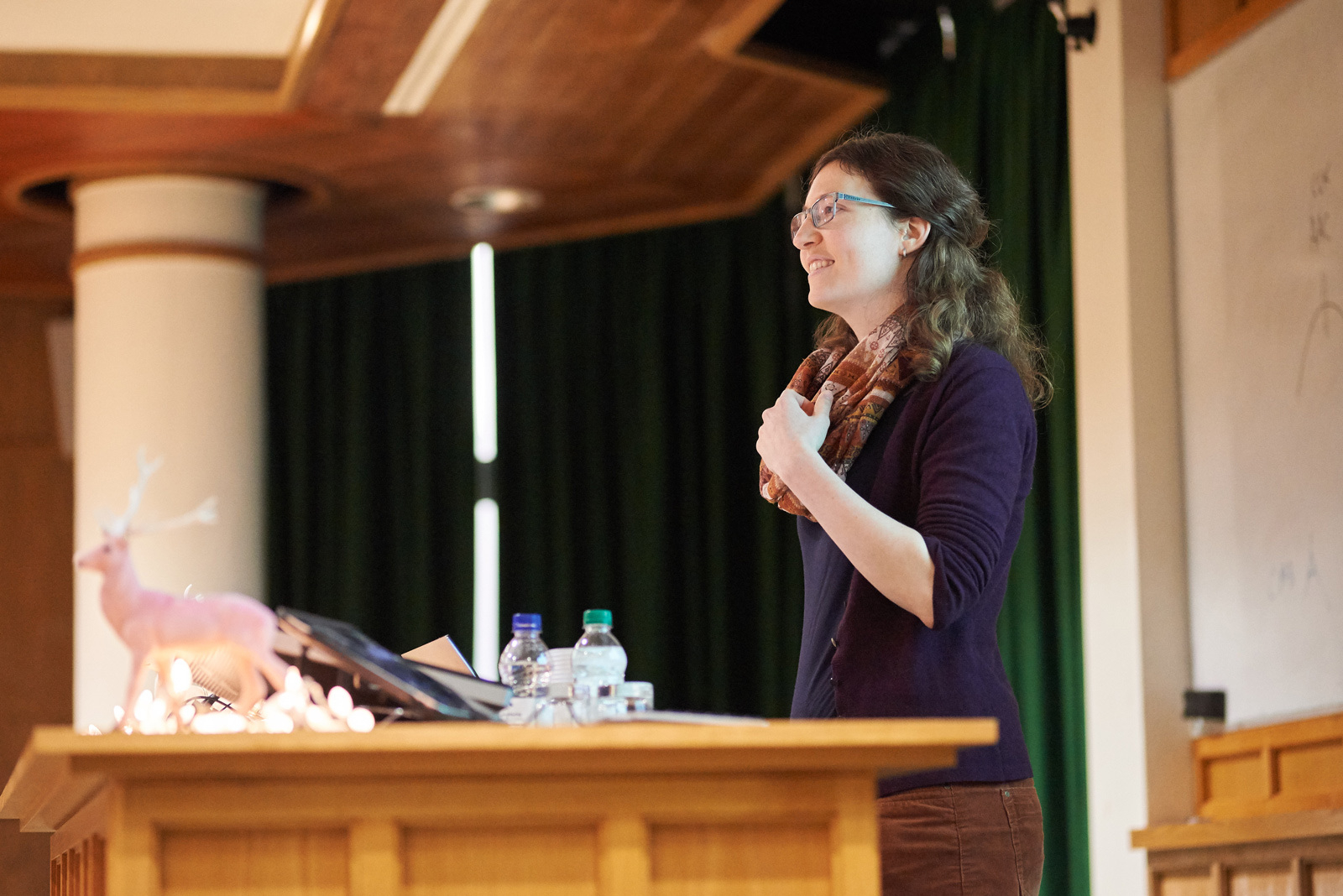 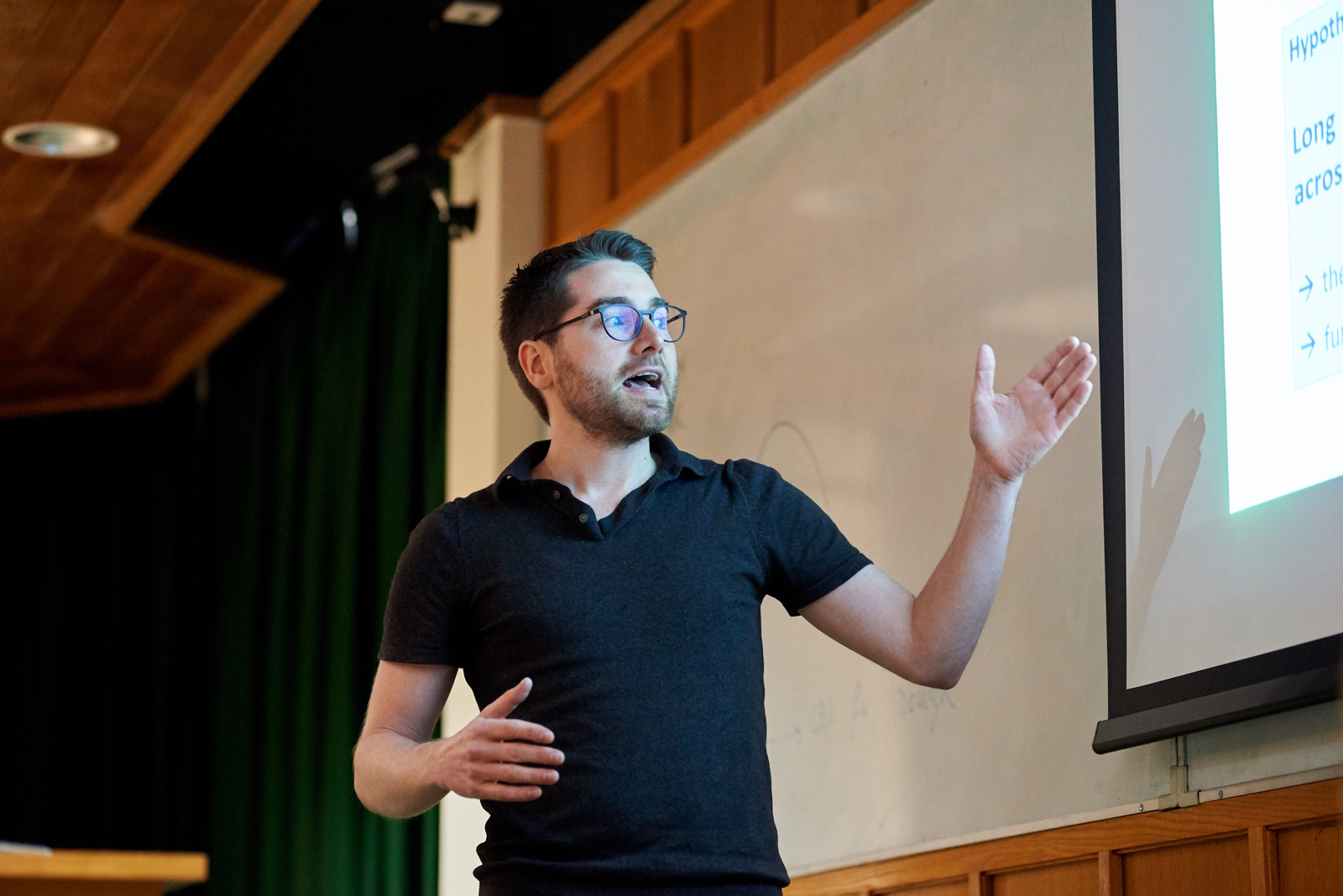 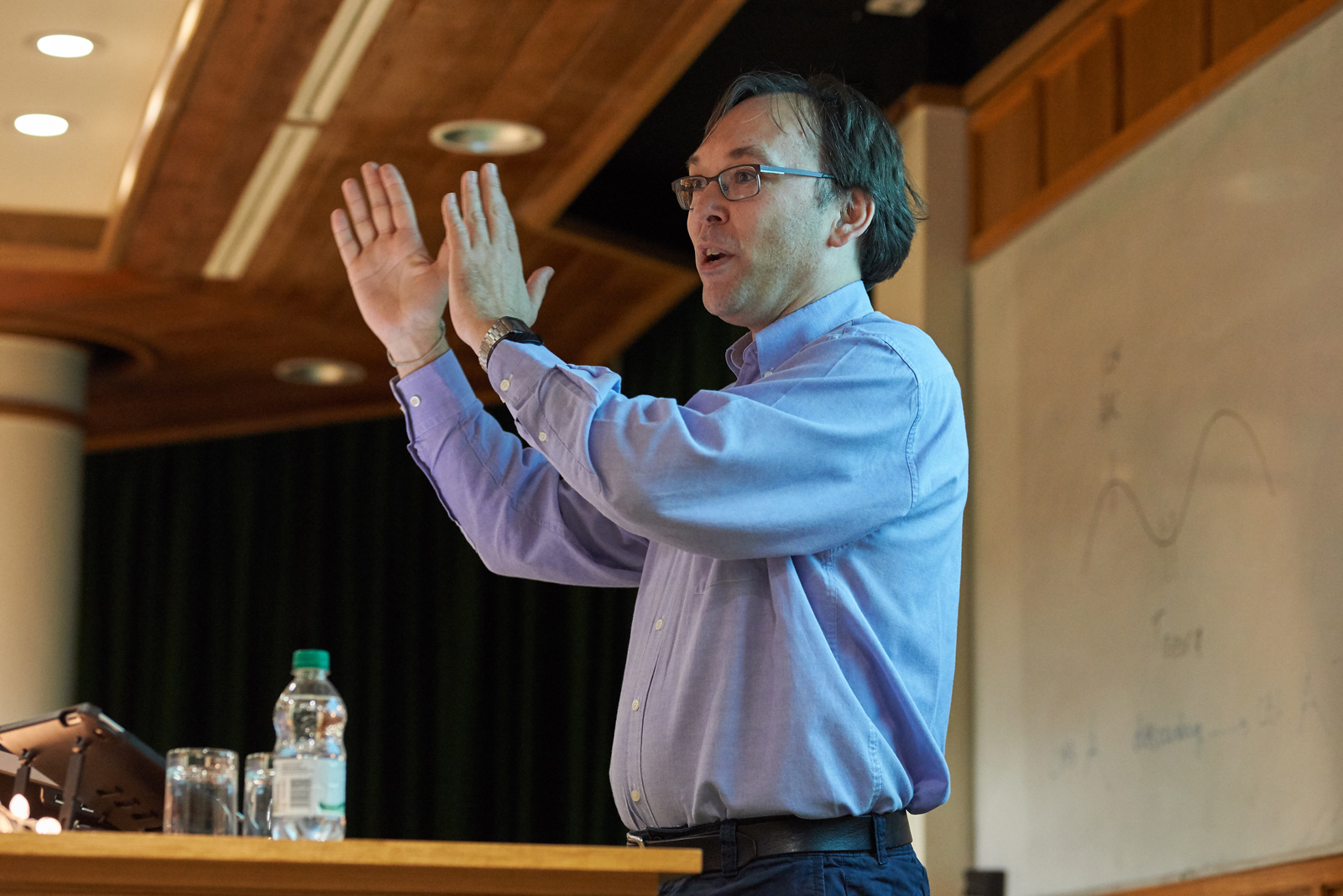 Unit Deputy Director Professor Peter Magill was recently in Westminster for a week of science and policy, as he began his participation in The Royal Society’s Pairing Scheme.

The Scheme, which takes place annually, pairs around 30 scientists with UK parliamentarians and civil servants, with a view to facilitating interactions and mutual understanding between researchers and policymakers. Over the ‘Week in Westminster’, the scientists take part in workshops focused on the interface of science with policy, hear from expert speakers drawn from academia, learned societies and government, and spend two days shadowing their pair in government. In turn, parliamentarians and civil servants experience the world of research through undertaking reciprocal visits to the scientists’ institutions.

Peter was paired with Lord James O'Shaughnessy, Parliamentary Under Secretary of State for Health (Lords). Peter was invited to shadow Lord O'Shaughnessy and his team for many of their daily engagements at the Department of Health, the House of Lords and further afield, including policy briefings, strategy meetings, keynote speeches, and question time in the chamber of the upper house.

Peter commented: “My time in Westminster was an extraordinary and invaluable experience. It was highly informative and empowering, and - just as important - really enjoyable. I have taken away a fresh perspective on how research findings can help inform the creation, scrutiny and revision of policy, as well as a better understanding of how researchers can get involved in the process. I was also struck by the openness, veracity and multitasking of my hosts working in government. I have no hesitation in strongly recommending the Pairing Scheme to other scientists and policymakers.” Many congratulations to Dr Gido van de Ven on being awarded the British Neuroscience Association’s (BNA) Postgraduate Prize for 2017.

The Prize is given annually to an individual postgraduate student on the basis of their outstanding performance in their studies, including the final thesis examination.

Gido was awarded this year’s Prize for his D.Phil. thesis research on the reactivation and reinstatement of hippocampal cell assemblies, as carried out in the Unit under the supervision of Unit Programme Leader Dr David Dupret.

Dr Dupret commented “I had the pleasure of supervising and working closely with Gido for almost 4 years. During this time, Gido was an exceptional student, consistently demonstrating a rare combination of insight, creativity and excellent technical ability. This Prize is a great achievement. Keep up the good work, Gido!” 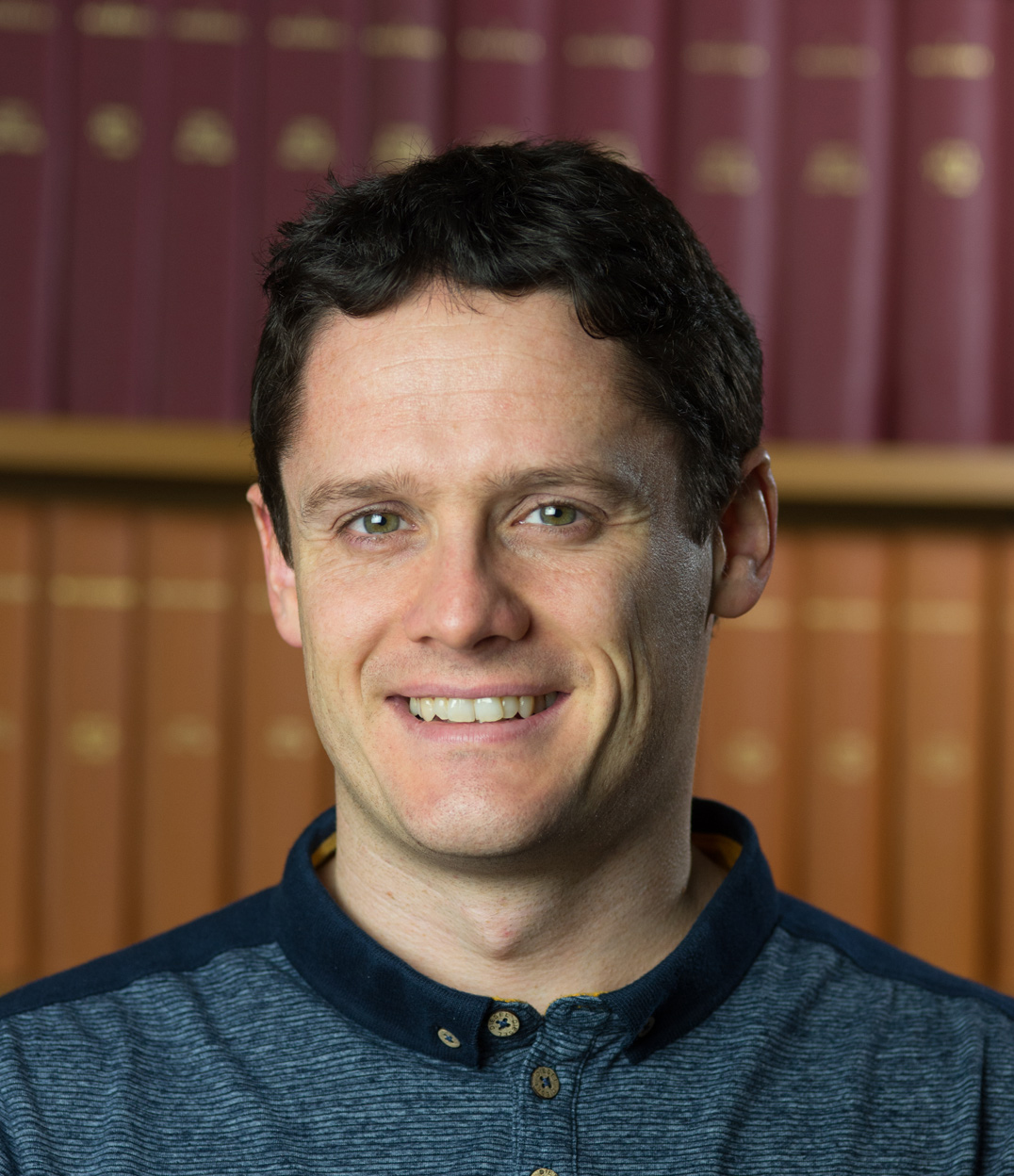 This Fellowship scheme offers recently qualified postdoctoral researchers the opportunity to start independent research careers, working in some of the best research environments in the world.

Colin will pursue his 4-year research project in the Unit under the sponsorship of Programme Leader Dr Andrew Sharott, as well as at Imperial College London in collaboration with Dr Timothy Constandinou. Colin will also be mentored by Professor Pascal Fries of the Ernst Strüngmann Institute, Germany.

Colin originally joined the Unit to pursue his D.Phil. studies in Dr David Dupret’s Group, where he investigated the influence of dopamine on hippocampal circuit dynamics and memory formation.  Since graduating, Colin has been working as a Postdoctoral Neuroscientist in Dr Sharott’s Group in the Unit.

Unit Deputy Director Professor Peter Magill commented “We are thrilled for Colin. He is an exceptional scientist, outstanding collaborator, and a valued colleague. Colin’s new Fellowship is well deserved, and is a fitting testament to the culture of research training and career development that we have established at the Unit.”

A warm welcome to Chien-Hung 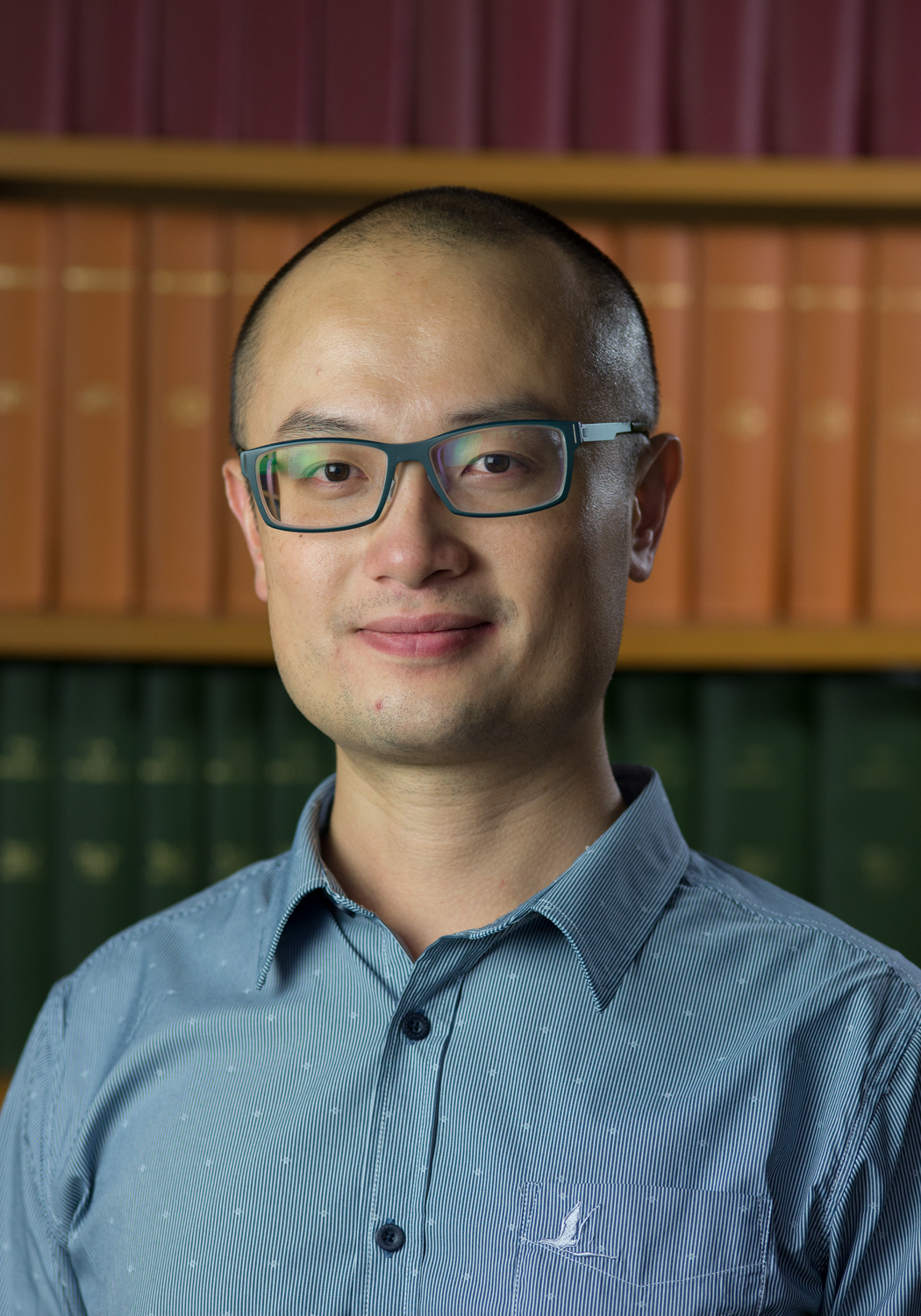 We are pleased to welcome Dr Chien-Hung Yeh to the Unit as a Postdoctoral Research Fellow in Professor Peter Brown’s Group.

Chien-Hung graduated from the National Central University, Taiwan, with a D.Phil. in Engineering. As part of Chien-Hung’s D.Phil. degree, he completed his thesis at the Research Center for Adaptive Data Analysis, where he used nonlinear approaches to analyze physical and biological signals, and developed effective biomarkers for clinical use. Thereafter, Chien-Hung continued his research at Harvard Medical School and Brigham and Women's Hospital, USA, working on the existence of spurious cross-frequency coupling in nonstationary and nonlinear signals, and identifying seizure dynamics in patients and circadian dynamics in animal models. After that, he worked with Dr Chiung-Chu Chen in Taiwan on oscillatory activity in the subthalamic nucleus, with special emphasis on gait disturbance.

In 2017, Chien-Hung was awarded a scholarship from the Postdoctoral Research Abroad Program in Taiwan to join the Unit. Chien-Hung will continue to research human gait, in collaboration with Dr Chiung-Chu Chen in Taiwan, as well as with Petra Fisher, Huiling Tan and Peter Brown in the Unit. 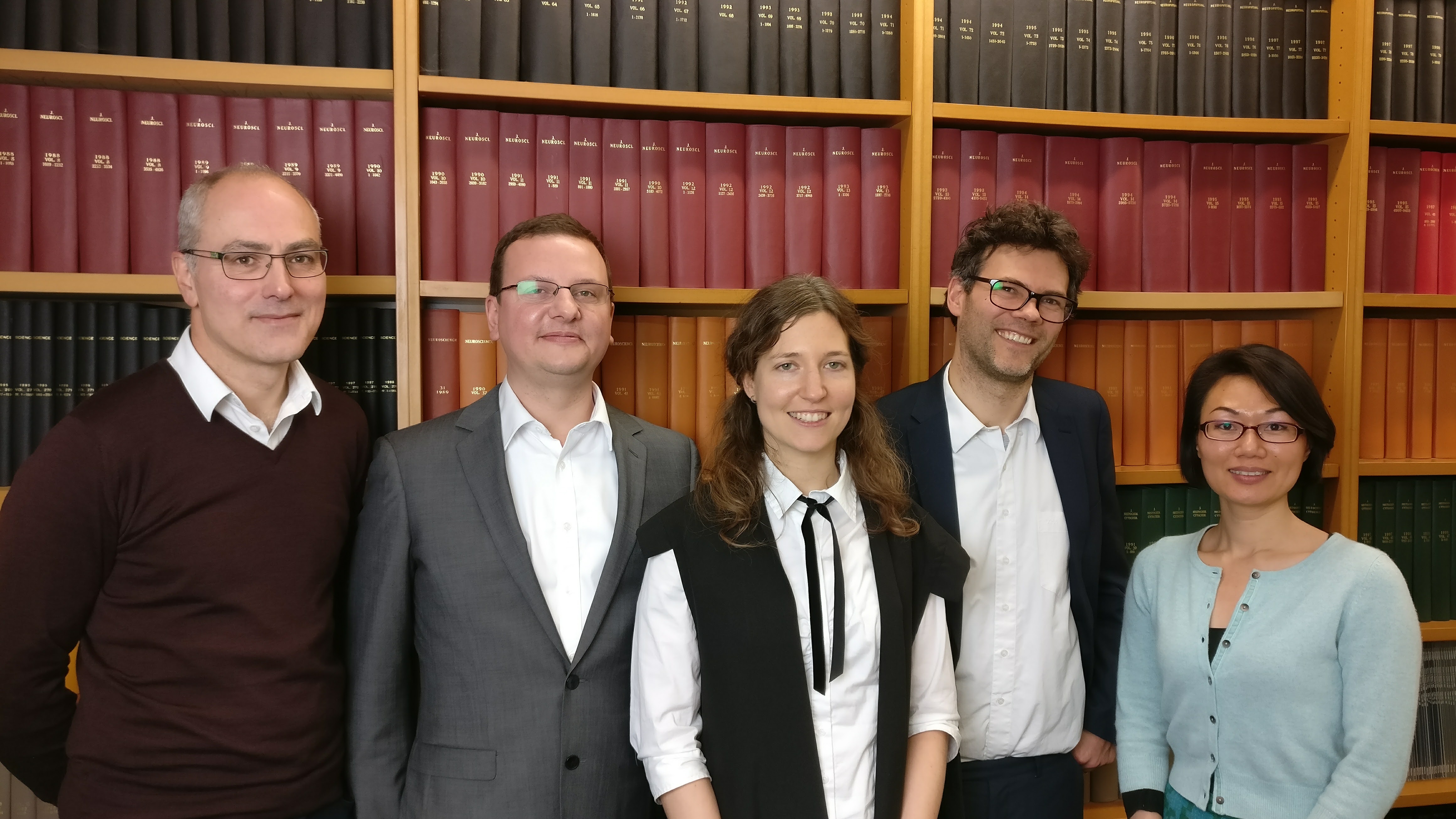 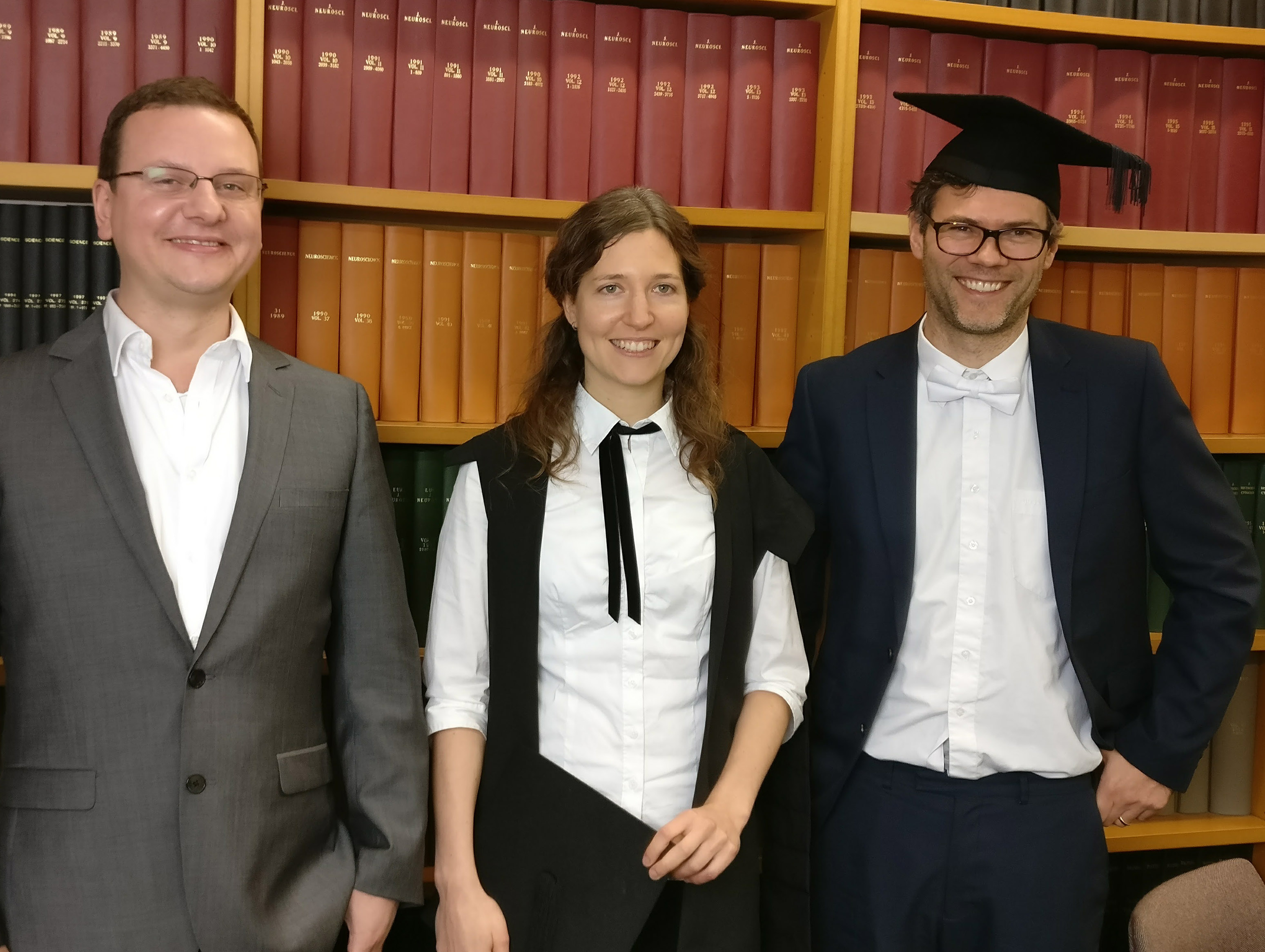