Pathological synchronisation of beta frequency oscillations between the subthalamic nucleus (STN) and cortex is thought to contribute to Parkinsonian symptoms. We show that action potentials fired by STN neurons are locked to the phase of beta oscillations in frontal cortex during both rest and movement, and the strength of synchronisation correlates with the severity of Parkinsonian motor deficits.

Pathological synchronisation of beta frequency (12-35Hz) oscillations between the subthalamic nucleus (STN) and cerebral cortex is thought to contribute to motor impairment in Parkinson's disease (PD). For this cortico-subthalamic oscillatory drive to be mechanistically important, it must influence the firing of STN neurons and, consequently, their downstream targets. Here, we examined the dynamics of synchronisation between STN LFPs and units with multiple cortical areas, measured using frontal ECoG, midline EEG and lateral EEG, during rest and movement. STN neurons lagged cortical signals recorded over midline (over premotor cortices) and frontal (over prefrontal cortices) with stable time delays, consistent with strong corticosubthalamic drive, and many neurons maintained these dynamics during movement. In contrast, most STN neurons desynchronised from lateral EEG signals (over primary motor cortices) during movement and those that did not had altered phase relations to the cortical signals. The strength of synchronisation between STN units and midline EEG in the high beta range (25-35Hz) correlated positively with the severity of akinetic-rigid motor symptoms across patients. Together, these results suggest that sustained synchronisation of STN neurons to premotor-cortical beta oscillations play an important role in disrupting the normal coding of movement in PD. 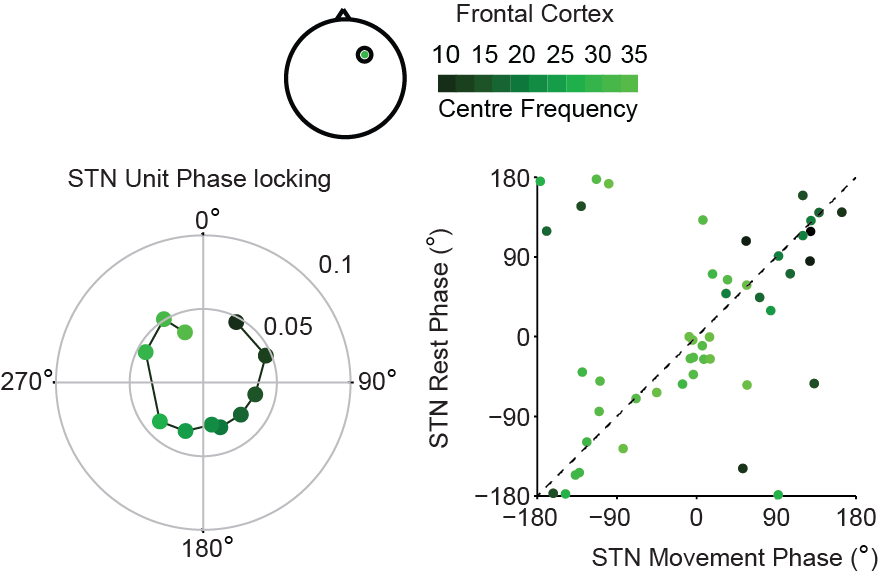 Left, the phase locking angle of action potentials recorded from STN neurons in relation to beta oscillations in the frontal electrocorticogram recorded from STN neurons in patients with Parkinson’s disease changes systematically depending on the frequency of the oscillation (colour scale, top). Right, the angle of phase locking is maintained between rest and movement periods, suggesting that pathological synchronisation is highly stable.
Citation
2018. Neurobiol. Dis., 112:49-62.
Free Full Text at Europe PMC
PMC5821899