Local field potentials (LFPs) may afford insight into the mechanisms of action of deep brain stimulation (DBS) and potential feedback signals for adaptive DBS. In Parkinson's disease (PD) DBS of the subthalamic nucleus (STN) suppresses spontaneous activity in the beta band and drives evoked resonant neural activity (ERNA). Here, we investigate how STN LFP activities change over time following the onset and offset of DBS. To this end we recorded LFPs from the STN in 14 PD patients during long (mean: 181.2 s) and short (14.2 s) blocks of continuous stimulation at 130 Hz. LFP activities were evaluated in the temporal and spectral domains. During long stimulation blocks, the frequency and amplitude of the ERNA decreased before reaching a steady state after ~70 s. Maximal ERNA amplitudes diminished over repeated stimulation blocks. Upon DBS cessation, the ERNA was revealed as an under-damped oscillation, and was more marked and lasted longer after short duration stimulation blocks. In contrast, activity in the beta band suppressed within 0.5 s of continuous DBS onset and drifted less over time. Spontaneous activity was also suppressed in the low gamma band, suggesting that the effects of high frequency stimulation on spontaneous oscillations may not be selective for pathological beta activity. High frequency oscillations were present in only six STN recordings before stimulation onset and their frequency was depressed by stimulation. The different dynamics of the ERNA and beta activity with stimulation imply different DBS mechanisms and may impact how these activities may be used in adaptive feedback. 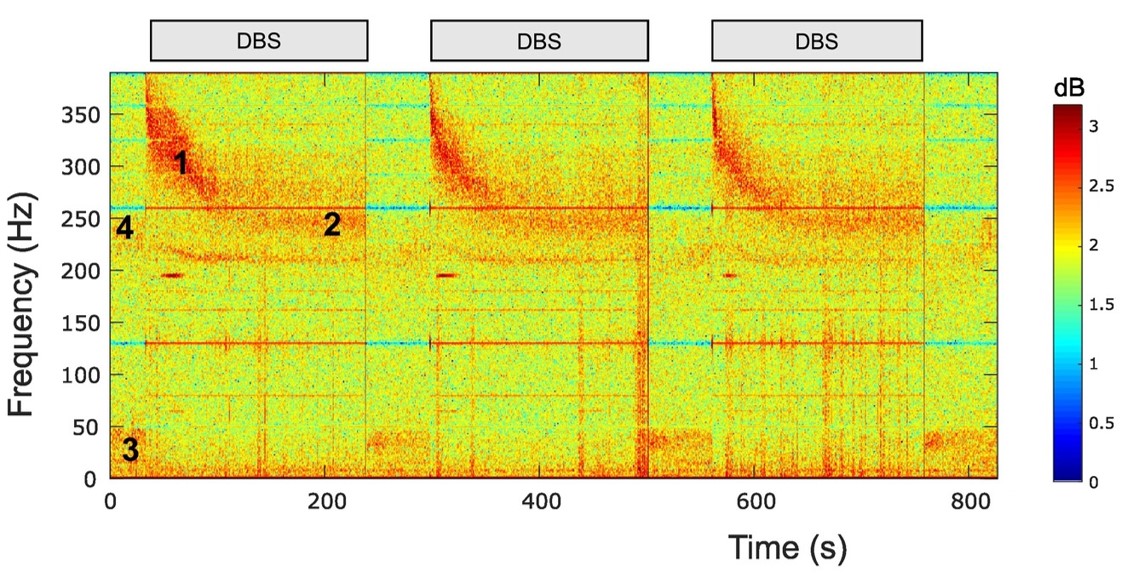 Time-frequency spectra of local field potentials recorded from the subthalamic nucleus in the brain of a patient with Parkinson’s during electrical stimulation (DBS) of the same site. An event-related resonance activity (ERNA) appears between 300 Hz and 350 Hz (more intense red colour around label 1), and then attenuates while dropping in frequency until it reaches a steady state centred around 250 Hz (label 2). In addition, during stimulation there is a prompt suppression of activity at 10-50 Hz (less intense red colour after label 3) and a modulation of the higher-frequency oscillations (label 4) present before stimulation.
Citation
2020. Neurobiol. Dis., 143:105019.
Free Full Text at Europe PMC
PMC7115855