The human subthalamic nucleus encodes the subjective value of reward and the cost of effort during decision-making.

In this paper, we recorded nerve cell activity in a part of the brain called the subthalamic nucleus when people with Parkinson’s disease engaged in an effort-based decision task. We identified that the subthalamic nucleus is one of the brain structures important for weighing up the value of actions against their associated effort, a balancing act that might be impaired in Parkinson’s disease.

Adaptive behaviour entails the capacity to select actions as a function of their energy cost and expected value and the disruption of this faculty is now viewed as a possible cause of the symptoms of Parkinson's disease. Indirect evidence points to the involvement of the subthalamic nucleus-the most common target for deep brain stimulation in Parkinson's disease-in cost-benefit computation. However, this putative function appears at odds with the current view that the subthalamic nucleus is important for adjusting behaviour to conflict. Here we tested these contrasting hypotheses by recording the neuronal activity of the subthalamic nucleus of patients with Parkinson's disease during an effort-based decision task. Local field potentials were recorded from the subthalamic nucleus of 12 patients with advanced Parkinson's disease (mean age 63.8 years ± 6.8; mean disease duration 9.4 years ± 2.5) both OFF and ON levodopa while they had to decide whether to engage in an effort task based on the level of effort required and the value of the reward promised in return. The data were analysed using generalized linear mixed models and cluster-based permutation methods. Behaviourally, the probability of trial acceptance increased with the reward value and decreased with the required effort level. Dopamine replacement therapy increased the rate of acceptance for efforts associated with low rewards. When recording the subthalamic nucleus activity, we found a clear neural response to both reward and effort cues in the 1-10 Hz range. In addition these responses were informative of the subjective value of reward and level of effort rather than their actual quantities, such that they were predictive of the participant's decisions. OFF levodopa, this link with acceptance was weakened. Finally, we found that these responses did not index conflict, as they did not vary as a function of the distance from indifference in the acceptance decision. These findings show that low-frequency neuronal activity in the subthalamic nucleus may encode the information required to make cost-benefit comparisons, rather than signal conflict. The link between these neural responses and behaviour was stronger under dopamine replacement therapy. Our findings are consistent with the view that Parkinson's disease symptoms may be caused by a disruption of the processes involved in balancing the value of actions with their associated effort cost. 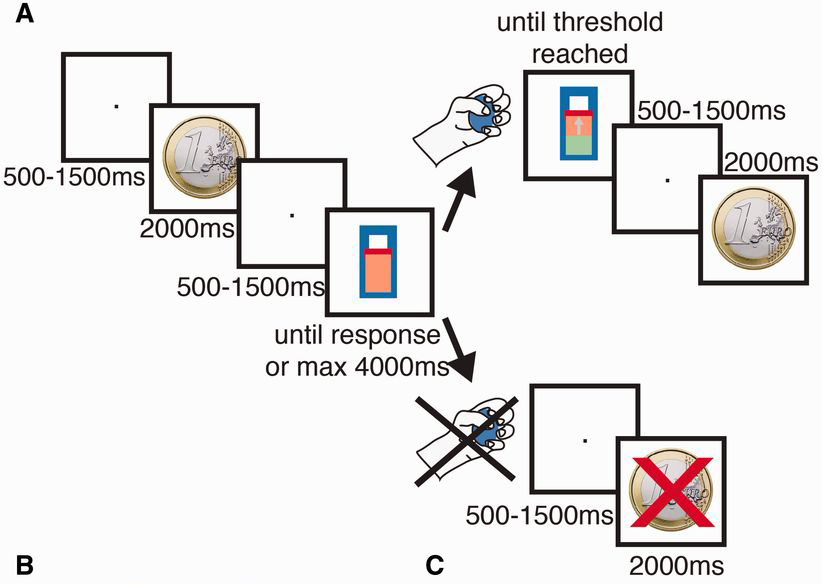