Conflict Detection in a Sequential Decision Task Is Associated with Increased Cortico-Subthalamic Coherence and Prolonged Subthalamic Oscillatory Response in the β Band.

Making accurate decisions often involves the integration of current and past evidence. Here, we examine the neural correlates of conflict and evidence integration during sequential decision-making. Female and male human patients implanted with deep-brain stimulation (DBS) electrodes and age-matched and gender-matched healthy controls performed an expanded judgment task, in which they were free to choose how many cues to sample. Behaviorally, we found that while patients sampled numerically more cues, they were less able to integrate evidence and showed suboptimal performance. Using recordings of magnetoencephalography (MEG) and local field potentials (LFPs; in patients) in the subthalamic nucleus (STN), we found that β oscillations signaled conflict between cues within a sequence. Following cues that differed from previous cues, β power in the STN and cortex first decreased and then increased. Importantly, the conflict signal in the STN outlasted the cortical one, carrying over to the next cue in the sequence. Furthermore, after a conflict, there was an increase in coherence between the dorsal premotor cortex and STN in the β band. These results extend our understanding of cortico-subcortical dynamics of conflict processing, and do so in a context where evidence must be accumulated in discrete steps, much like in real life. Thus, the present work leads to a more nuanced picture of conflict monitoring systems in the brain and potential changes because of disease. Decision-making often involves the integration of multiple pieces of information over time to make accurate predictions. We simultaneously recorded whole-head magnetoencephalography (MEG) and local field potentials (LFPs) from the human subthalamic nucleus (STN) in a novel task which required integrating sequentially presented pieces of evidence. Our key finding is prolonged β oscillations in the STN, with a concurrent increase in communication with frontal cortex, when presented with conflicting information. These neural effects reflect the behavioral profile of reduced tendency to respond after conflict, as well as relate to suboptimal cue integration in patients, which may be directly linked to clinically reported side-effects of deep-brain stimulation (DBS) such as impaired decision-making and impulsivity. 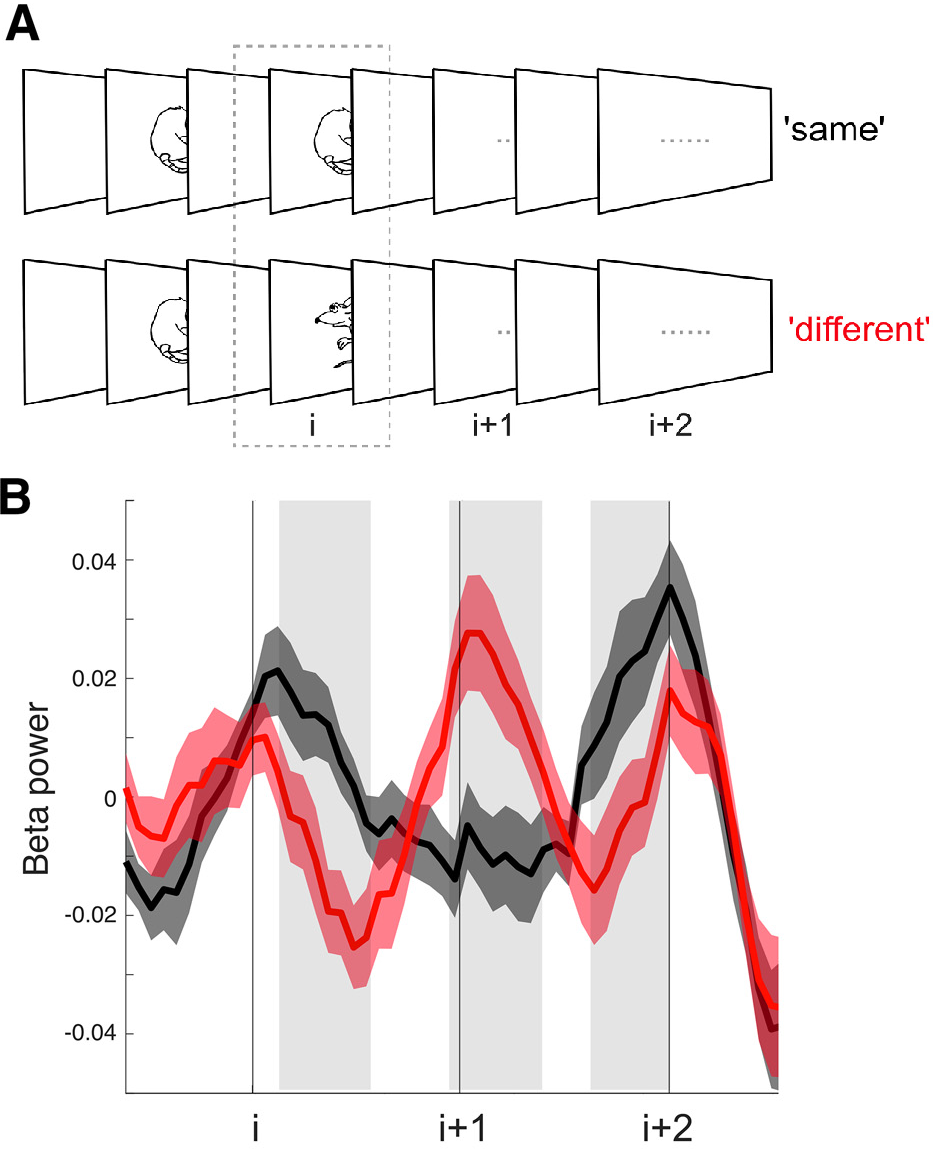 Dependence of neural activity on conflict in sensory evidence. A) Experimental paradigm. The participants has to decide if a mouse will “run” left or right based on a sequence of pictures in which mouse was more likely to face the direction it will eventually “run”. Two pictures in a sequence could either show same direction or different (conflicting) information. B) The power of beta oscillations in the subthalamic nucleus depended on whether the stimuli in the sequence were same or different.
Citation