Deep Brain Stimulation of the Subthalamic Nucleus Does Not Affect the Decrease of Decision Threshold during the Choice Process When There Is No Conflict, Time Pressure, or Reward.

Past work on the brain and behaviour suggests that, during decision making – such as choosing between two options - the evidence for one option over another is combined until the collected evidence reaches a level supporting a choice, known as a ‘decision boundary’. In this study, we tested whether this boundary is affected by deep brain stimulation, but have not found any effect on the boundary.

During a decision process, the evidence supporting alternative options is integrated over time, and the choice is made when the accumulated evidence for one of the options reaches a decision threshold. Humans and animals have an ability to control the decision threshold, that is, the amount of evidence that needs to be gathered to commit to a choice, and it has been proposed that the subthalamic nucleus (STN) is important for this control. Recent behavioral and neurophysiological data suggest that, in some circumstances, the decision threshold decreases with time during choice trials, allowing overcoming of indecision during difficult choices. Here we asked whether this within-trial decrease of the decision threshold is mediated by the STN and if it is affected by disrupting information processing in the STN through deep brain stimulation (DBS). We assessed 13 patients with Parkinson disease receiving bilateral STN DBS six or more months after the surgery, 11 age-matched controls, and 12 young healthy controls. All participants completed a series of decision trials, in which the evidence was presented in discrete time points, which allowed more direct estimation of the decision threshold. The participants differed widely in the slope of their decision threshold, ranging from constant threshold within a trial to steeply decreasing. However, the slope of the decision threshold did not depend on whether STN DBS was switched on or off and did not differ between the patients and controls. Furthermore, there was no difference in accuracy and RT between the patients in the on and off stimulation conditions and healthy controls. Previous studies that have reported modulation of the decision threshold by STN DBS or unilateral subthalamotomy in Parkinson disease have involved either fast decision-making under conflict or time pressure or in anticipation of high reward. Our findings suggest that, in the absence of reward, decision conflict, or time pressure for decision-making, the STN does not play a critical role in modulating the within-trial decrease of decision thresholds during the choice process. 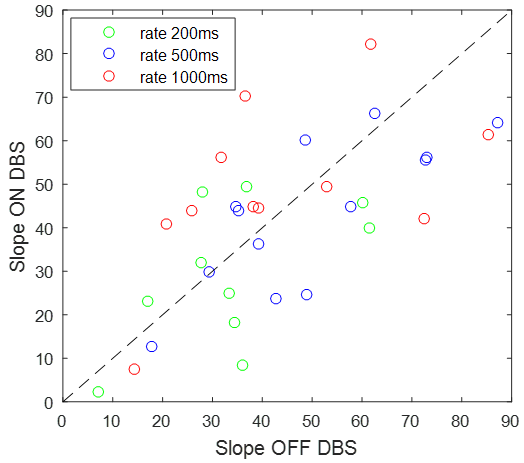