Past work on the brain and behaviour suggests that, during decision making – such as choosing between two options - the evidence for one option over another is combined until the collected evidence reaches a level supporting a choice, known as a ‘decision boundary’. In this study, we show that a decision boundary can drop with time during the choice process, allowing indecision to be overcome.

The dominant theoretical framework for decision making asserts that people make decisions by integrating noisy evidence to a threshold. It has recently been shown that in many ecologically realistic situations, decreasing the decision boundary maximizes the reward available from decisions. However, empirical support for decreasing boundaries in humans is scant. To investigate this problem, we used an ideal observer model to identify the conditions under which participants should change their decision boundaries with time to maximize reward rate. We conducted 6 expanded-judgment experiments that precisely matched the assumptions of this theoretical model. In this paradigm, participants could sample noisy, binary evidence presented sequentially. Blocks of trials were fixed in duration, and each trial was an independent reward opportunity. Participants therefore had to trade off speed (getting as many rewards as possible) against accuracy (sampling more evidence). Having access to the actual evidence samples experienced by participants enabled us to infer the slope of the decision boundary. We found that participants indeed modulated the slope of the decision boundary in the direction predicted by the ideal observer model, although we also observed systematic deviations from optimality. Participants using suboptimal boundaries do so in a robust manner, so that any error in their boundary setting is relatively inexpensive. The use of a normative model provides insight into what variable(s) human decision makers are trying to optimize. Furthermore, this normative model allowed us to choose diagnostic experiments and in doing so we present clear evidence for time-varying boundaries. (PsycINFO Database Record 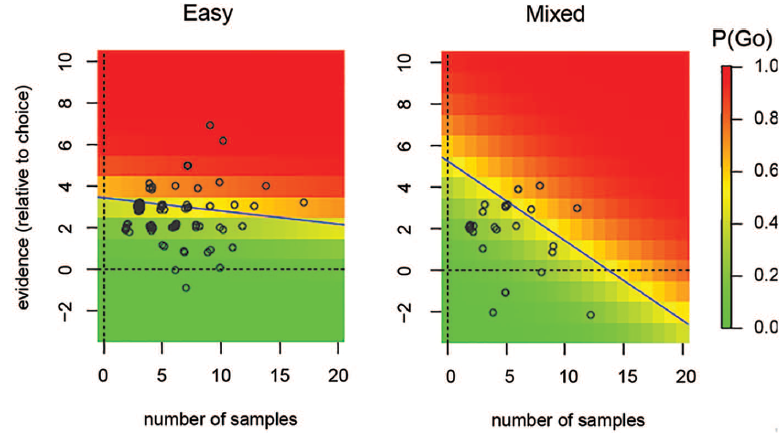 Circles show the combinations of evidence and time in which a sample participant made choices in different conditions, and the blue lines indicate the estimated decision boundaries.
Citation