Past work on the brain and behaviour suggests that, during decision making – such as choosing between two options - the evidence for one option over another is combined until the collected evidence reaches a level supporting a choice, known as a ‘decision boundary’. In this study, we analyse what shape this boundary needs to take, in order to maximize the rate of rewards for correct choices.

The most widely used account of decision-making proposes that people choose between alternatives by accumulating evidence in favor of each alternative until this evidence reaches a decision boundary. It is frequently assumed that this decision boundary stays constant during a decision, depending on the evidence collected but not on time. Recent experimental and theoretical work has challenged this assumption, showing that constant decision boundaries are, in some circumstances, sub-optimal. We introduce a theoretical model that facilitates identification of the optimal decision boundaries under a wide range of conditions. Time-varying optimal decision boundaries for our model are a result only of uncertainty over the difficulty of each trial and do not require decision deadlines or costs associated with collecting evidence, as assumed by previous authors. Furthermore, the shape of optimal decision boundaries depends on the difficulties of different decisions. When some trials are very difficult, optimal boundaries decrease with time, but for tasks that only include a mixture of easy and medium difficulty trials, the optimal boundaries increase or stay constant. We also show how this simple model can be extended to more complex decision-making tasks such as when people have unequal priors or when they can choose to opt out of decisions. The theoretical model presented here provides an important framework to understand how, why, and whether decision boundaries should change over time in experiments on decision-making. 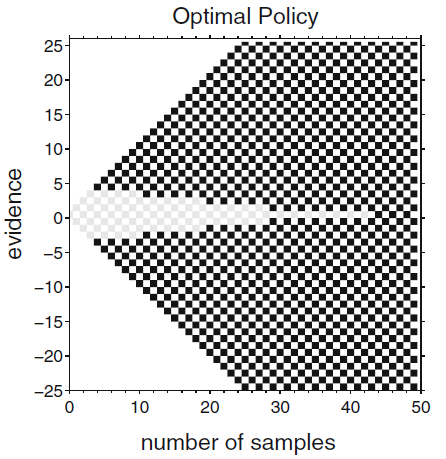 An example of an optimal decision boundary in a task with difficulties varying across trials.
Citation
2018.Psychon Bull Rev, 25(3):971-996.
Free Full Text at Europe PMC
PMC5990589