The occurrence and severity of epilepsy seizures are rhythmic and vary across the day-night cycle. Here, we explored the use of a new implantable brain stimulator capable of adjusting the delivery of therapeutic electrical pulses according to the time of day. The stimulator was tested in a canine with naturally occurring epilepsy. In the seven months following implantation, no high-severity seizures were observed, allowing for reduced medication.

Circadian and other physiological rhythms play a key role in both normal homeostasis and disease processes. Such is the case of circadian and infradian seizure patterns observed in epilepsy. However, these rhythms are not fully exploited in the design of active implantable medical devices. In this paper we explore a new implantable stimulator that implements chronotherapy as a feedforward input to supplement both open-loop and closed-loop methods. This integrated algorithm allows for stimulation to be adjusted to the ultradian, circadian and infradian patterns observed in patients through slowly-varying temporal adjustments of stimulation and algorithm sub-components, while also enabling adaption of stimulation based on immediate physiological needs such as a breakthrough seizure or change of posture. Embedded physiological sensors in the stimulator can be used to refine the baseline stimulation circadian pattern as a "digital zeitgeber," i.e., a source of stimulus that entrains or synchronizes the subject's natural rhythms. This algorithmic approach is tested on a canine with severe drug-resistant idiopathic generalized epilepsy exhibiting a characteristic diurnal pattern correlated with sleep-wake cycles. Prior to implantation, the canine's cluster seizures evolved to status epilepticus (SE) and required emergency pharmacological intervention. The cranially-mounted system was fully-implanted bilaterally into the centromedian nucleus of the thalamus. Using combinations of time-based modulation, thalamocortical rhythm-specific tuning of frequency parameters as well as fast-adaptive modes based on activity, the canine experienced no further SE events post-implant as of the time of writing (7 months). Importantly, no significant cluster seizures have been observed either, allowing the reduction of rescue medication. The use of digitally-enabled chronotherapy as a feedforward signal to augment adaptive neurostimulators could prove a useful algorithmic method in conditions where sensitivity to temporal patterns are characteristics of the disease state, providing a novel mechanism for tailoring a more patient-specific therapy approach. 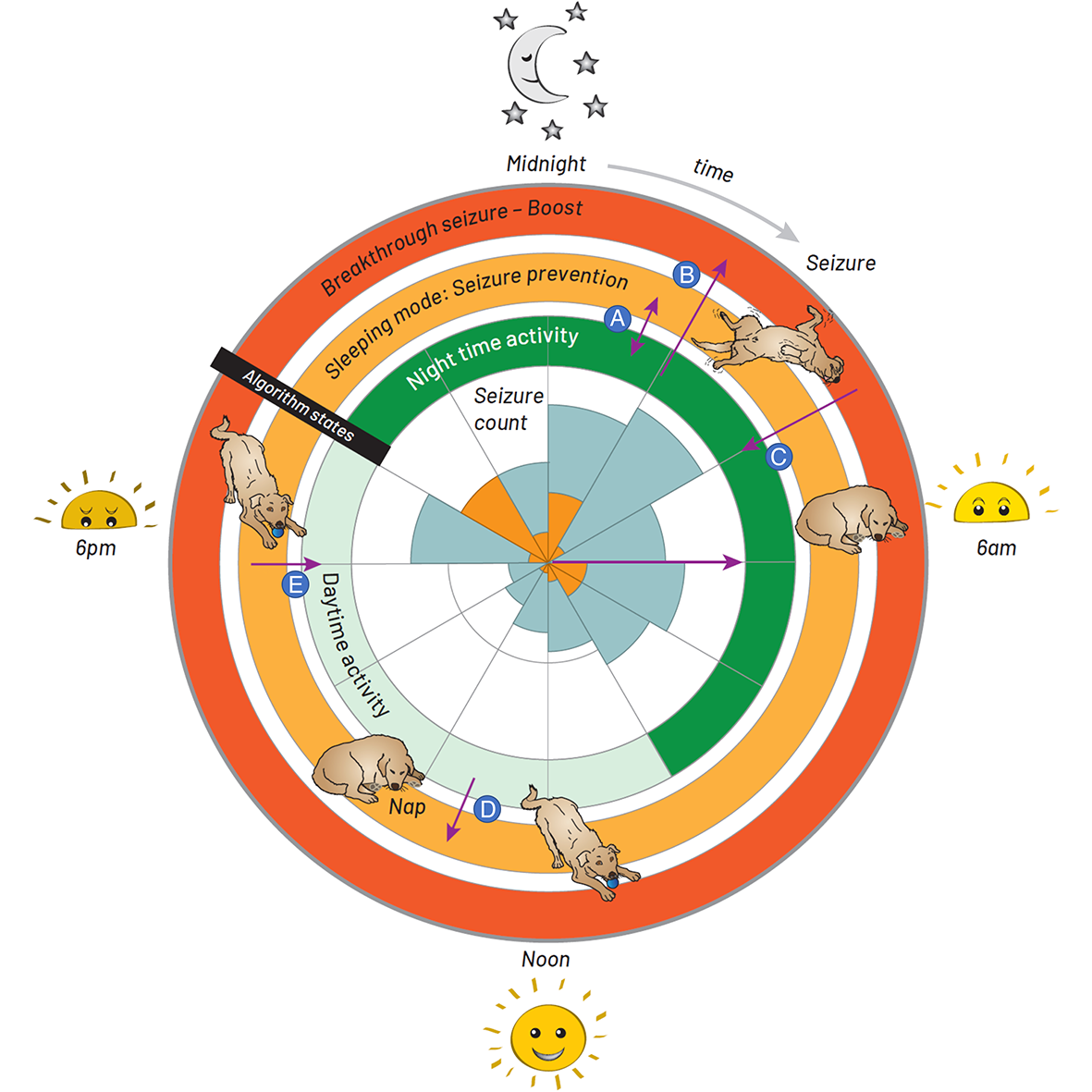