Our decisions are influenced by at least two different 'systems' within the brain: a sophisticated system that builds understanding of the world around us (called the model-based system), and a simpler one that learns which choices result in rewards (called the model-free system). We investigated how hunger affects these two systems, and discovered that hungry people rely on the model-free system to a larger extent.

Human decisions can be reflexive or planned, being governed respectively by model-free and model-based learning systems. These two systems might differ in their responsiveness to our needs. Hunger drives us to specifically seek food rewards, but here we ask whether it might have more general effects on these two decision systems. On one hand, the model-based system is often considered flexible and context-sensitive, and might therefore be modulated by metabolic needs. On the other hand, the model-free system's primitive reinforcement mechanisms may have closer ties to biological drives. Here, we tested participants on a well-established two-stage sequential decision-making task that dissociates the contribution of model-based and model-free control. Hunger enhanced overall performance by increasing model-free control, without affecting model-based control. These results demonstrate a generalized effect of hunger on decision-making that enhances reliance on primitive reinforcement learning, which in some situations translates into adaptive benefits. 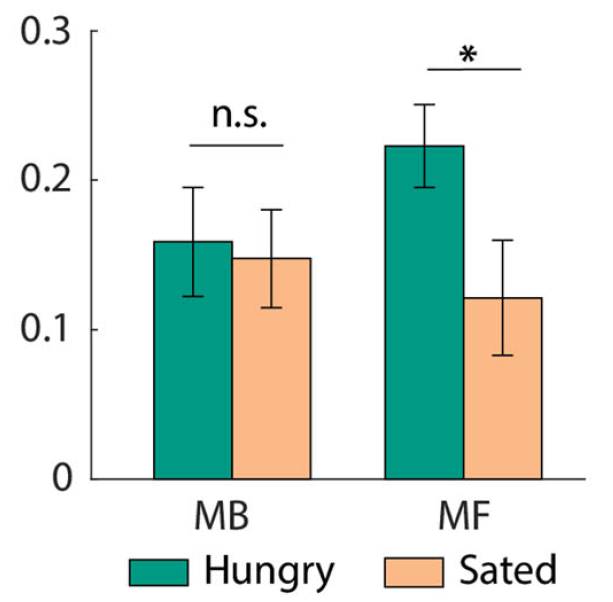