Distinguishing the central drive to tremor in Parkinson's disease and essential tremor.

Tremor can be a devastating feature of two very common conditions, Parkinson’s disease and Essential Tremor. Here we work back from the character of peripheral tremor to derive how pathological oscillatory activity is organised in the brain, and show that this organisation dictates how different tremors respond to electrical interventions that could form the basis for new treatments.

Parkinson's disease (PD) and essential tremor (ET) are the two most common movement disorders. Both have been associated with similar patterns of network activation leading to the suggestion that they may result from similar network dysfunction, specifically involving the cerebellum. Here, we demonstrate that parkinsonian tremors and ETs result from distinct patterns of interactions between neural oscillators. These patterns are reflected in the tremors' derived frequency tolerance, a novel measure readily attainable from bedside accelerometry. Frequency tolerance characterizes the temporal evolution of tremor by quantifying the range of frequencies over which the tremor may be considered stable. We found that patients with PD (N = 24) and ET (N = 21) were separable based on their frequency tolerance, with PD associated with a broad range of stable frequencies whereas ET displayed characteristics consistent with a more finely tuned oscillatory drive. Furthermore, tremor was selectively entrained by transcranial alternating current stimulation applied over cerebellum. Narrow frequency tolerances predicted stronger entrainment of tremor by stimulation, providing good evidence that the cerebellum plays an important role in pacing those tremors. The different patterns of frequency tolerance could be captured with a simple model based on a broadly coupled set of neural oscillators for PD, but a more finely tuned set of oscillators in ET. Together, these results reveal a potential organizational principle of the human motor system, whose disruption in PD and ET dictates how patients respond to empirical, and potentially therapeutic, interventions that interact with their underlying pathophysiology. 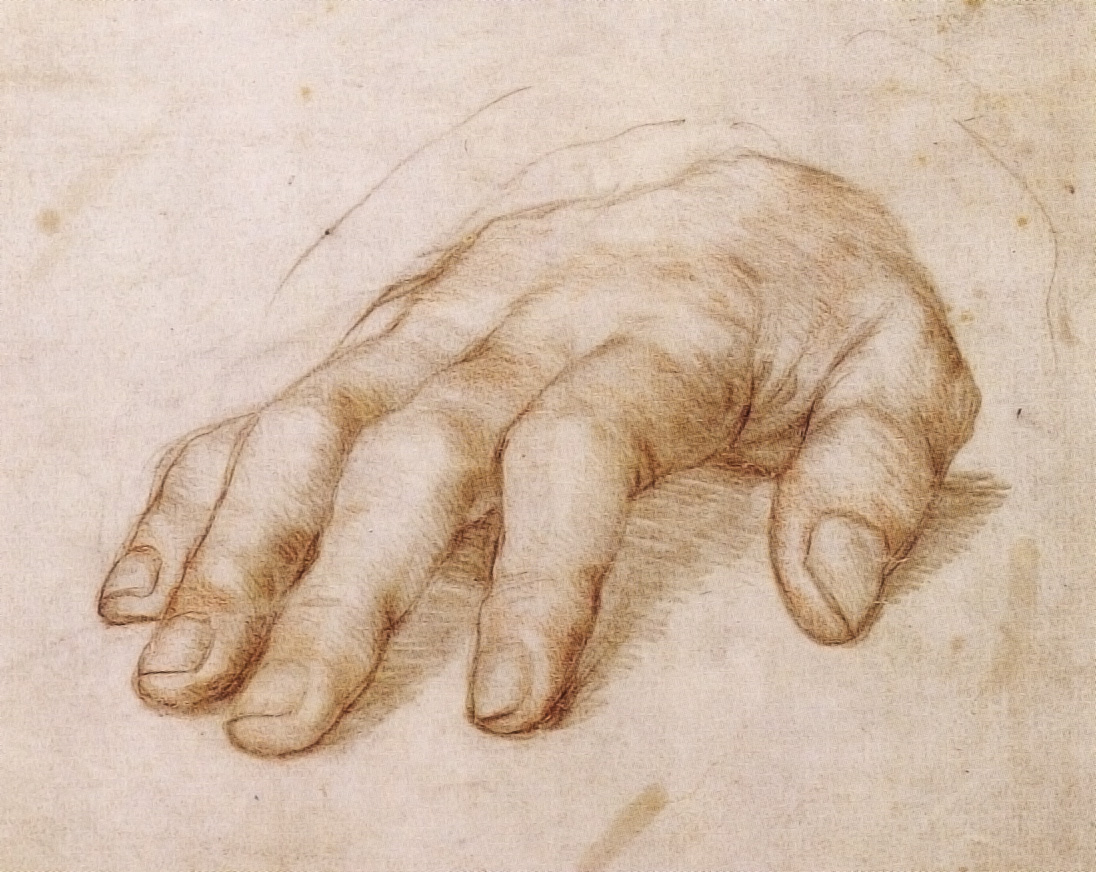 Detail of 'Study of Right Hand of Erasmus of Rotterdam and Portrait Study' by Hans Holbein the Younger (1498–1543), silverpoint, black crayon and red chalk on grey-primed paper c. 1523. This is a faithful photographic reproduction of a two-dimensional, public domain work of art.
Citation