Neurons of the motor thalamus mediate basal ganglia and cerebellar influences on cortical activity. To elucidate the net result of γ-aminobutyric acid-releasing or glutamatergic bombardment of the motor thalamus by basal ganglia or cerebellar afferents, respectively, we recorded the spontaneous activities of thalamocortical neurons in distinct identified "input zones" in anesthetized rats during defined cortical activity states. Unexpectedly, the mean rates and brain state dependencies of the firing of neurons in basal ganglia-recipient zone (BZ) and cerebellar-recipient zone (CZ) were matched during slow-wave activity (SWA) and cortical activation. However, neurons were distinguished during SWA by their firing regularities, low-threshold spike bursts and, more strikingly, by the temporal coupling of their activities to ongoing cortical oscillations. The firing of neurons across the BZ was stronger and more precisely phase-locked to cortical slow (≈ 1 Hz) oscillations, although both neuron groups preferentially fired at the same phase. In contrast, neurons in BZ and CZ fired at different phases of cortical spindles (7-12 Hz), but with similar strengths of coupled firing. Thus, firing rates do not reflect the predicted inhibitory-excitatory imbalance across the motor thalamus, and input zone-specific temporal coding through oscillatory synchronization with the cortex could partly mediate the different roles of basal ganglia and cerebellum in behavior. 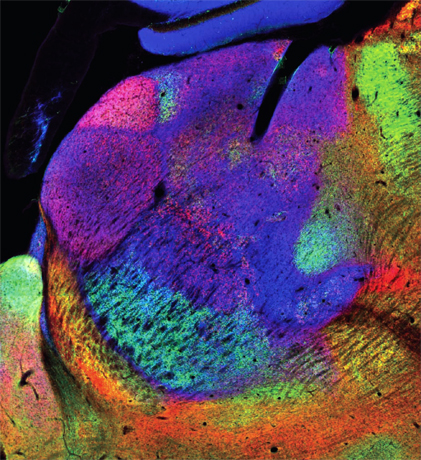