If brain signals are to be used to control when and how brain stimulation is applied for therapy, then we must be confident that such signals remain consistent and informative over time. Using a special brain pacemaker device that allowed us to record brain signals over long periods, we show that these signals remain informative about the clinical states of people with Parkinson’s for many months.

Exaggerated oscillatory activity in the beta frequency band in the subthalamic nucleus has been suggested to be related to bradykinesia in Parkinson's disease (PD). However, studies seeking correlations between such activity in the local field potential and motor performance have been limited to the immediate postoperative period, which may be confounded by a stun effect that leads to the temporary alleviation of PD deficits. 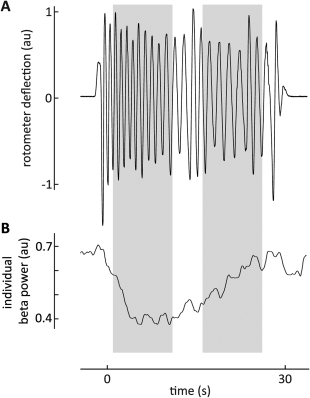 Top trace is the recording of repetitive wrist movements made by a person affected by Parkinson’s. There is a reduction in the size and frequency of the movements over time (bradykinesia). Lower trace shows the suppression in power of the beta-band oscillations recorded at the same time in the contralateral subthalamic nucleus. The suppression of beta-band power dissipates in tandem with the increase in bradykinesia.
Citation