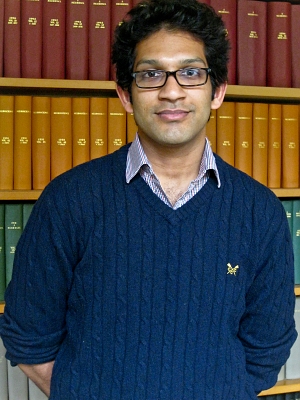 Rahul Shah is a Neurosurgical Registrar (Resident), based at the John Radcliffe Hospital, Oxford. Rahul graduated with honours from Leicester Medical School in 2010, during which he did neurosurgical electives at the University of Cape Town, South Africa, and the Mayo Clinic Rochester, USA. In 2012, as an academic foundation doctor in Southampton, Rahul undertook a 4-month period of research with Peter Magill and Andrew Sharott at the University of Oxford, and gained his Membership of the Royal College of Surgeons of England. After Ranking 1st in UK Neurosurgery National Selection in 2013, he started the 8-year neurosurgical training programme in Oxford. In 2015, he was awarded a prestigious Wellcome Trust Doctoral Training Fellowship for Clinicians to undertake his D.Phil. in the Sharott Group. In 2019, after returning to clinical training, he successfully defended his D.Phil. thesis entitled “Connectivity-specified targeting and manipulation of the motor thalamus”.

Rahul’s research interests focus on cortico-subcortical-thalamocortical loop circuits that are essential for cognitive and sensorimotor processing in mammals. Understanding their normal function in health, and dysfunction in disease (e.g. Parkinson’s disease, essential tremor, dystonia, stroke, brain tumours, obsessive-compulsive disorder, Tourette syndrome), are both critical for developing novel, safer surgical treatments or surgical adjuncts for neurorehabilitation. As part of the wider Unit’s core aim of developing brain-computer interfaces that selectively target circuit malfunctions in brain disorders, during his D.Phil. research Rahul used state-of-the-art techniques in mice to define the electrophysiological signatures and behavioural correlates of abnormal neuronal dynamics in the basal ganglia- and cerebellar-recipient thalamocortical projections. He continues to actively contribute to this theme of research as an Associate Unit Member, working closely with the Sharott Group. Rahul is also exploring how translational questions raised by this research can be addressed in humans to better predict the functional consequences of neurosurgery and potential for neurological recovery.

Structural and molecular heterogeneity of calretinin-expressing interneurons in the rodent and primate striatum.